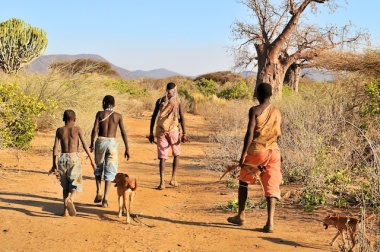 Hadza hunter-gatherers spend hundreds of calories a day on activity yet burn the same total number of calories as city dwellers in the U.S. – Kudu Lodge

You think my title is fake, don’t you? It’s not. It’s what science is finding out. It surprises me too!

Herman Pontzer, an anthropologist at Hunter College, says that FitBits and other fitness trackers lie because they don’t take into account:

The best way to track how many calories someone has burned is with the doubly labeled water method. When Pontzer used it on the Hadza, modern-day hunter-gatherers who lead physically hard lives, he found they burned the same calories as sedentary populations:

The Hadza looked like everyone else. Hadza men ate and burned about 2,600 calories a day, Hadza women about 1,900 calories a day — the same as adults in the U.S. or Europe. We looked at the data every way imaginable, accounting for effects of body size, fat percentage, age and sex. No difference.

It’s not just the Hadza:

How is this possible?

How does the body adjust to higher activity levels to keep daily energy expenditure in check? … [One] possibility is that the body makes room for the cost of additional activity by reducing the calories spent on the many unseen tasks that take up most of our daily energy budget: the housekeeping work that our cells and organs do to keep us alive. … For example, exercise often reduces inflammatory activity that the immune system mounts as well as levels of reproductive hormones such as estrogen. In lab animals, increased daily exercise has no effect on daily energy expenditure but instead results in fewer ovulatory cycles and slower tissue repair.

So, we max out at something less than 3000 calories a day, no matter how hard we exercise. And we pay for hard exercise by diverting energy from things like tissue repair. That’s risky business, no?

Of course, exercise it important … for the heart, the brain, the immune system. It’s just not going to whittle away the pounds, not by itself. You must change diet:

If daily energy expenditure has not changed over the course of human history, the primary culprit in the modern obesity pandemic must be the calories consumed.

According to Pontzer, fitness trackers are only weakly related to metabolism.

On average, couch potatoes tended to spend about 200 fewer calories each day than people who were moderately active: the kind of folks who get some exercise during the week and make a point to take the stairs. But more important, energy expenditure plateaued at higher activity levels: people with the most intensely active daily lives burned the same number of calories each day as those with moderately active lives.

In this diagram, the graph on the left is what we assume, but the graph on the right is what has been measured. It’s probably more accurate. Total energy expenditure (TEE) increases with physical activity (PA) only at low activity levels. At higher activity levels, the body adapts by limiting energy spent on “other” (growth, tissue repair, hormone production), keeping TEE constrained:

1 thought on “Modern-Day Hunter-Gatherers, Who Lead Physically Hard Lives, Burn Same Number Of Calories As More Sedentary Populations In US And Europe”