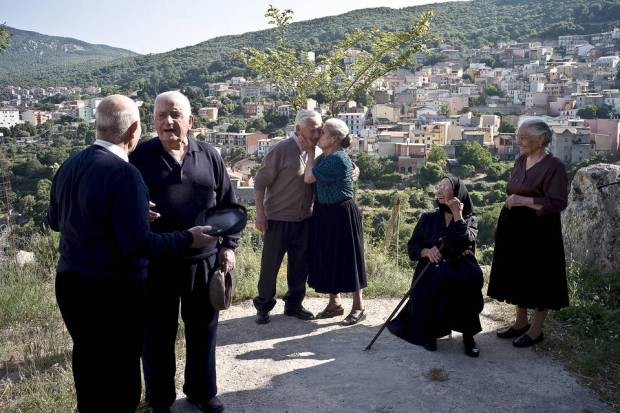 The author of this next article, Dan Buettner, is the author of the popular book, The Blue Zones: Lessons for Living Longer From the People Who’ve Lived the Longest. For over a decade, Buettner has traveled the world studying pockets of people who live long lives with low rates of chronic disease.

Want Great Longevity and Health? It Takes a Village, The Wall Street Journal, 22 May 2015

The subtitle tells the story:

The secrets of the world’s longest-lived people include community, family, exercise and plenty of beans.

Buettner says it’s probably not these peoples’ genes that are helping them live long:

Several studies have shown that the genetic markers of the centenarians — including markers associated with cardiovascular mortality, cancer and inflammation — don’t diverge significantly from those of the general population.

It’s a mixture of diet and lifestyle. Here’s what he says about diet:

Based on the work we did in Sardinia and four other blue zones, a team of researchers at the University of Minnesota helped us to reverse-engineer a diet of the world’s healthiest populations. We gathered 155 dietary surveys from all five areas, covering the eating habits of the past century, and came up with a global average.

More than 65% of what people in the blue zones ate came from complex carbohydrates: sweet potatoes in Okinawa, Japan; wild greens in Ikaria, Greece; squash and corn in Costa Rica’s Nicoya Peninsula. Their diet consists mainly of vegetables, fruits, whole grains, beans and other carbohydrates. They eat meat but only small amounts, about five times a month, usually on celebratory occasions.

The cornerstone of every longevity diet in the world was the humble bean. One five-country study showed that beans were the only food that predicted a longer life—for each 20-gram serving (about two tablespoons) eaten a day, the chance of dying dropped by 8%. Fava beans in Sardinia, black beans in Costa Rica, lentils in Ikaria, soybeans in Okinawa.

This sentence in the end is so true. It is the essence of public health:

For enduring gains in health in the U.S., we should shift our tactics away from trying to change individual behavior to optimizing our surroundings. We should make healthy choices not only easy, but also sometimes unavoidable — so that longevity “just happens” to Americans.

People are afraid that eating carbs – potatoes, squash, corn, rice, beans – will lead to chronic disease and early death. It did just the opposite for the world’s longest-lived people. At least you can say it didn’t impede their long life.