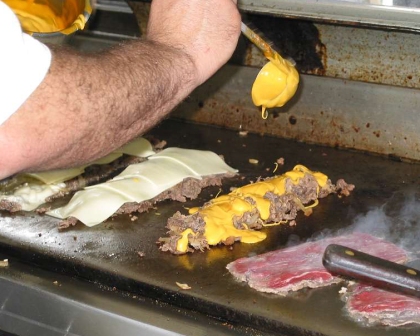 Photo of Lorenzo’s Pizza, on Christian Street in my hometown of Philadelphia. Cheesesteaks are almost synonymous with this city.

My previous post described a study that found eating a meal high in fat, especially saturated fat, increased inflammation in the airways, contributing to asthma.

This post describes a study that found eating a meal high in saturated fat increased systemic (whole body) inflammation.  Consistent, low-grade inflammation is thought to contribute to atherosclerosis, and so, to heart disease.

The Effect Of Two Iso-Caloric Meals Containing Equal Amounts Of Fats With A Different Fat Composition On The Inflammatory And Metabolic Markers In Apparently Healthy Volunteers, Journal of Inflammation (London), January 2013

The main finding of the present study was the elevation of the hs-CRP* level within 2 hours and prolonged hypertriglyceridemia within 4 hours as a result of a high saturated fat meal in apparently healthy non obese participants.

*CRP is C-reactive protein, a marker for inflammation

“Mediators of inflammation have been clearly shown to be involved in the induction of an insulin resistant state.”

A transient, macronutrient-related, microinflammatory response could explain, at least in part, the appearance of a dynamic insulin-resistant state which could be responsible for a postprandial hypertriglyceridemic response.

Evident from the quotes above, not only did saturated fat increase inflammation, but also triglycerides:

“In this study, the average triglyceride levels in the fasting state were normal, increased as expected after both meals, but continued to increase only after the high SFA meal, more profoundly in men than in women.”

“We showed that the hs-CRP levels were affected by the SFA meal differently in women and in men, with a higher increase in men than in women.”

These effects were for a single meal, but:

“Since most people eat every few hours, it is reasonable to assume that following repeated high SFA meals they have continuous high levels of triglycerides and low-grade inflammation, with a borderline effect for gender.”

This is yet another piece of evidence showing how saturated fat contributes to the development of diabetes and heart disease. I just don’t get how people continue to claim saturated fat’s role in chronic disease is a myth.

1 thought on “A Meal High In Saturated Fat Increases Inflammation”