The study below included an approximation of three diets of Crete. The authors describe them as:

Mediterranean Diet of Crete, Food And Nutrient Content, Journal of the Academy of Nutrition and Dietetics, December 2000

A) One diet represented the traditional Cretan diet of the 1960s, which has been of great interest because of its cardioprotective benefits as inferred from large epidemiologic studies such as the Seven Countries study. The population of Crete was found to have the best health status and the lowest morbidity and mortality rates from coronary heart disease and cancer of all 16 cohorts, including other Mediterranean populations. The 3 Italian cohorts, for example, had over twice as high 25-year mortality rates for coronary heart disease in comparison with the Cretan cohort. The Cretan cohort had the lowest, age-adjusted, all-cause mortality rate after 20 years. The diet of the population of Crete was found to be the main factor related to excellent health status and lowest mortality rates.

B) Also analyzed was the present-day diet of adolescents, a diet that reflects the Westernized trends that are increasingly evident in the diet of young Greeks.

C) The third diet analyzed was that of the Greek Orthodox church during a period of fasting. The fasting period as defined by the church has been one of the main characteristics of the Cretan Mediterranean diet for the past 2,000 years. The tradition is maintained in the Greek monasteries, and many elderly Greeks still follow the fasting rules.

This is why I have been focusing on the Greek diet, particularly Crete, in my Mediterranean Diet posts, and not, say, the Italian diet.

Here’s a table from the study: 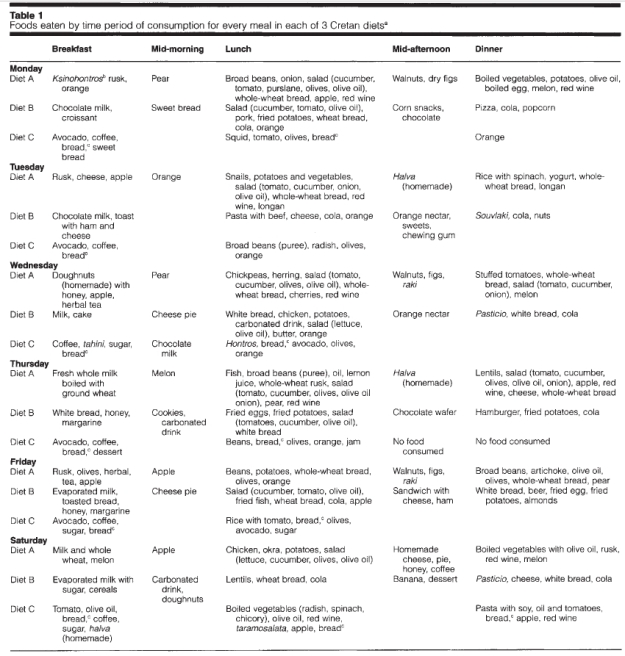 What do you see?

I see a few things … Diet A has salad almost every day, sometimes twice a day. Whole fruit every day. Lots of cooked vegetables. It also has a lot of dairy food: milk, cheese, or yogurt almost every morning. There is animal food 5 out of 7 days for lunch, and 4 out of 7 for dinner (egg, yogurt, cheese, fish). There is eating going on 5 times a day. And olive oil every day. I’m having a hard time believing that this is the traditional Mediterranean diet, that poor rural Cretans who had just emerged from a World War and a Civil War, which together devasted the country and caused hundreds of thousands to flee because they couldn’t feed themselves, would eat this abundantly. What’s more likely is that this was a diet indirectly subsidized by the United States to prevent war-torn Greece from aligning with communist countries. Greece joined NATO in 1952 and thanks to the Truman Doctrine, was flush with Western money and influence by the early 1960s, when Diet A was recorded.

About fasting (which seems to be more about choice of food than outright non-eating):

Mount Athos monks, who are thought to follow the traditional Mediterranean diet, and who adhere to the tenets of the Eastern Orthodox Church, eat two meals a day, the morning meal and the evening meal:

They eat two meals a day. The “first meal” lasts 10 minutes; the “second meal” also lasts 10 minutes. There’s no meat and no dinner table conversation – the only sound is a monk reading from sacred texts.

Those in Diet C here, which is supposed to represent the tenets of the Eastern Orthodox church, also appear to be eating two meals, at least during the week. It was during the fasting period of Lent.

The fasting period as defined by the church has been one of the main characteristics of the Cretan Mediterranean diet for the past 2,000 years.

Most people in Greece are Eastern Orthodox, and, as I read, practice the fasting aspects of their religion:

The trend towards secularism has been less pronounced in the traditionally Catholic countries of Mediterranean Europe. Greece as the only traditionally Eastern Orthodox country in Europe which has not been part of the communist Eastern Bloc also retains a very high religiosity, with in excess of 95% of Greeks adhering to the Greek Orthodox Church.

Greece isn’t a secular country. Its diet reflects that, e.g. no olive oil, meat, fish, milk and dairy products every Wednesday and Friday throughout the year. But Diet A broke this tradition. It seems to be a non-fasting, secular diet.

Interestingly, Diet C also diverges from the fasting rituals described by the Orthodox religion. During Lent, meat, dairy, and eggs are not allowed, fish is allowed except on Wednesdays and Fridays, oil is allowed only on the weekend. I see dairy food and oil during the week, not much though.

To me, Diet C is a whole lot closer to how people in Greece ate during the first half of the twentieth century when their reputation for health and longevity was being forged.