What would happen if you put some people on a diet of mostly ultra-processed food (NOVA Group 4 from my previous post) and compared them to a group of people who ate less processed foods (mostly NOVA Group 1)?

That’s what Kevin Hall did in his recent study:

[Hyperpalatable] foods are deliberately engineered in such a way that they surpass the reward properties of traditional foods, such as vegetables, fruits, and nuts. Food chemists achieve this by suffusing products with increased levels of fat, sugar, flavors, and food additives.

This is how the authors desribed it:

Ultra-processed foods may facilitate overeating and the development of obesity because they are typically high in calories, salt, sugar, and fat and have been suggested to be engineered to have supernormal appetitive properties that may result in pathological eating behavior. Furthermore, ultra-processed foods are theorized to disrupt gut-brain signaling and may influence food reinforcement and overall intake via mechanisms distinct from the palatability or energy density of the food.

This small study was the first randomized, controlled study to compare ultra-processed with less-processed foods. It’s likely more studies will follow because:

The rise in obesity and type 2 diabetes prevalence occurred in parallel with an increasingly industrialized food system characterized by large-scale production of high-yield, inexpensive, agricultural “inputs” (primarily corn, soy, and wheat) that are refined and processed to generate an abundance of “added value” foods. Ultra-processed foods have become more common worldwide, now constitute the majority of calories consumed in America, and have been associated with a variety of poor health outcomes, including death.

Two other mechanisms I’ve reported in the past that could cause people to gain weight on ultra-processed foods that don’t have anything directly to do with nutrients are:

2. Food Combination: The combination of high fat and easily digested carb in a meal can, over time, contribute to weight gain, glucose dysregulation, and other metabolic disorders.

My feeling about this study … I like it but it’s more a technology demonstrator than a plan for how to eat. I just don’t see people eating mostly NOVA Group 1 (unprocessed and minimally-processed foods). For one thing, unprocessed food costs more.

The weekly cost for ingredients to prepare 2,000 kcal/day of ultra-processed meals was estimated to be $106 versus $151 for the unprocessed meals as calculated using the cost of ingredients obtained from a local branch of a large supermarket chain.

It’s not just the cost of the food that’s a barrier. Labor required to eat this way, a whole-foods diet, is considerable. I’ve said this. Hall says it too:

Policies that discourage consumption of ultra-processed foods should be sensitive to the time, skill, expense, and effort required to prepare meals from minimally processed foods—resources that are often in short supply for those who are not members of the upper socioeconomic classes.

If you pick the study link up top and click “Supplemental Materials” under “Method Details” and “Diets” you can see photos of the actual meals used in the metabolic ward in the study. I learned a lot from these. For instance, here’s an ultra-processed dinner: 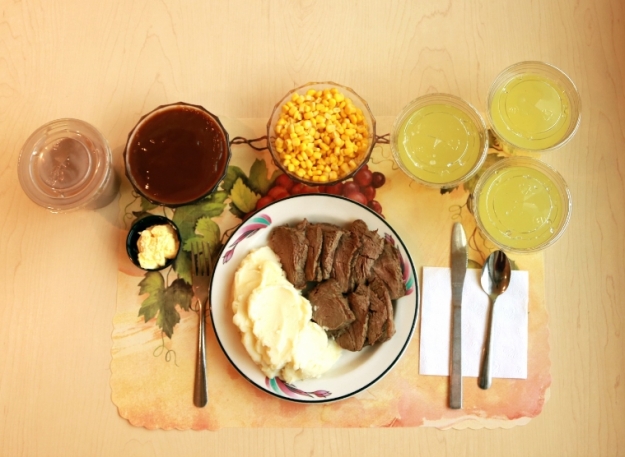 At first glance it didn’t look very processed to me, just a potato that was mashed, some whole kernel corn, and slices of beef.

I looked it up:

Sugar inside the meat? And lots of other ingredients. Definitely counts as NOVA Group 4.

It wasn’t a fresh potato, maybe dried granules and salt and what looks like a preservative. Yep, NOVA Group 4.

I couldn’t find Giant (not Green Giant) canned corn but I think it’s unfair to call whole corn kernels ultra-processed even if they had salt added. They allow pasta in the unprocessed menu and that’s a more processed food to me.

Here’s the unprocessed dinner for comparison:

Holy Cow, the effort involved in putting that on the table at the end of a work day!  I saw that he served black beans several times a week, made from scratch using dried beans. Cooking black beans from scratch takes a long time, I can attest, as does cooking whole farro or whole barley which he also serves.