I’m reading The Blue Zones by Dan Buettner.  An unusually large number of Sardinians live into their 100s and remain fit while doing so. Here’s Buettner writing about their diet.

“Their diet was fairly typical of families in the region before the American-style food culture arrived, as surveys before the 1940s revealed. “Shepherds and peasants in Sardinia have an exceptionally simple diet, which is extraordinarily lean even by Mediterranean standards,” a 1941 survey reported.

“Bread is by far the main food. Peasants leave early in the morning to the fields with a kilogram of bread in their saddlebag … At noon their meal consists only of bread, with some cheese among wealthier families, while the majority of the workers are satisfied with an onion, a little fennel, or a bunch of ravanelli. At dinner, the reunited family eats a single meal consisting of a vegetable soup (minestrone) to which the richest add some pasta.

In most areas, families ate meat only once a week, on Sunday. In 26 of 71 municipalities surveyed, meat is a luxury eaten only during festivals, not more than twice a month. Interestingly for a Mediterranean culture, fish did not figure prominently into the diet.”

Ravanelli are radishes. I had to look that up.
A kilogram is 2.2 pounds. That’s a lot of bread! Here’s some info on it: 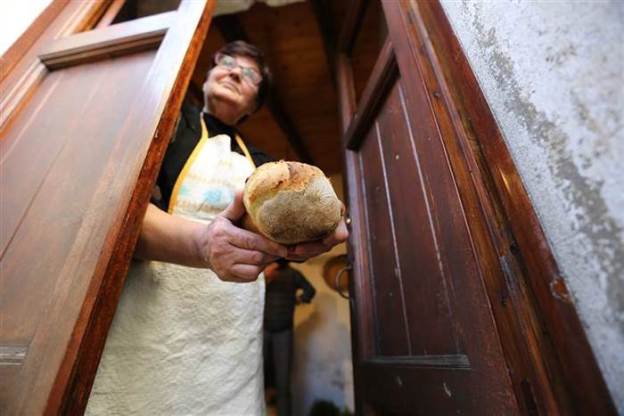 Much like sourdough bread in the United States, Sardinian sourdough breads are made from whole wheat and use live lactobacilli (rather than yeast) to rise the dough. This process also converts sugars and gluten into lactic acid, lowering the bread’s glycemic index and imparting a pleasant, faintly sour taste.

Pes has demonstrated that this type of bread is able to lower the glycemic load, reducing after-meal glucose and insulin blood levels by 25 percent. This helps protect the pancreas and may help prevent obesity and diabetes.

Photo and caption from Today.com

1 thought on “Long-Lived Sardinians Ate A Lot Of Bread”