I’m really glad I took the time to read this study and didn’t rely on just media reports. (Thank you, Shaun, for sending a link to the full article!) Absolutely every single news story said that eating fiber, fruits, and vegetables protected Africans’ colons from cancer. But, in the bowels of the study, you can see it was the starch. They ate cornmeal at every single meal – breakfast, lunch, and dinner – in addition to rice and potatoes! They didn’t even eat that many fruits and vegetables, nothing near the 5-A-Day we’re told to consume. That photo to the right, from the study, tells the real story. It was all those bowls of starch, as well as a diet very low in fat and animal food, that protected them from colon cancer.

Here we investigate further the role of fat and fibre in this association. We performed 2-week food exchanges in subjects from the same populations, where African Americans were fed a high-fibre, low-fat African-style diet and rural Africans a high-fat, low-fibre western-style diet, under close supervision. In comparison with their usual diets, the food changes resulted in remarkable reciprocal changes in mucosal biomarkers of cancer risk and in aspects of the microbiota and metabolome known to affect cancer risk, best illustrated by increased saccharolytic fermentation and butyrogenesis, and suppressed secondary bile acid synthesis in the African Americans.

We have shown in individuals from high-risk and from low-risk cancer populations that changes in the food content of fibre and fat had remarkable effects on their colonic microbiota and metabonome within 2 weeks, and, critically, that these changes were associated with significant changes in mucosal inflammation and proliferation. … A high basal state of chronic inflammation [may progress] through proliferation to neoplasia, culminating in the emergence of colon cancer.

The authors said that “animal protein and fat intake [was] 2 to 3 times higher in Americans and fibre intake, chiefly in the form of resistant starch, [was] higher in Africans.”

Here was their macronutrient breakdown: 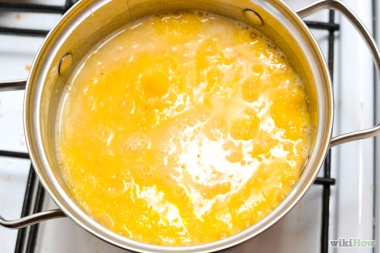 African cornmeal porridge on its way to becoming ugali, similar to a firm polenta. It’s used as an accompaniment to salads, soups, and stews. Wikihow gives a great recipe.

Why was the rural African diet better? One big reason was all that Hi-maize resistant starch at every meal! That’s a product, a starch, made from corn, processed to be slightly more resistant to our digestive enzymes. Resistant starch passes through the small intestine unabsorbed. It ends up in the colon where bacteria feed on it and give off short-chain fatty acids, e.g. butyrate. Butyrate has been shown to reduce irritable and inflamed bowel, improve the health of cells lining the colon, and protect against colon cancer. What’s not to love? But you have to get it down there. You can’t eat butyrate directly (the body digests/absorbs it before it reaches the colon). You have to eat starch and you have to have a population of bacteria that eat that starch. If you eat a lot of meat and fat, you develop a population that pushes out the starch-eaters. This study found that the non-starch-eating bacteria which colonize the colon of meat-and-fat eaters actually promote cancer growth.

You don’t have to buy any special product to replicate the effect of Hi-maize resistant starch. As you know, resistant starch develops in starchy food – in porridge, grits, polenta, pasta, rice, and other starches – all by itself, through several cycles of boiling and cooling. Cold cooked pasta, rice, corn (polenta), and potatoes have a lot of resistant starch naturally.