… and they get better not just in measures of blood sugar, but their LDL, triglycerides, and other lipid measures improve.

The diet Dr. Greger is focusing on here (see video below) is a type of Macrobiotic Diet that is essentially a low-fat, vegan diet that concentrates on whole grains, beans, and vegetables for its carbs.

This chart blows me away. It’s a screen shot from his video. Look how much better the Macrobiotic Diet (green) did against an American Diabetes Association Diet (black), which most people would call a pretty healthful diet (a Mediterranean style diet): 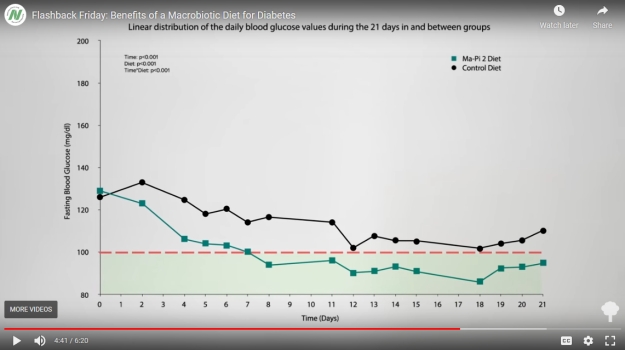 Here’s an example of that control Diabetes Association diet. It’s not vegan, not low-fat. It didn’t reach the level of benefit of the Macrobiotic diet.

From: The effect of the macrobiotic Ma-Pi 2 diet vs. the recommended diet in the management of type 2 diabetes: the randomized controlled MADIAB trial, Nutrition and Metabolism, August 2014

So, below was NOT the best diet:

Here’s Dr. Greger’s video that explains this in more detail. I’ve included the transcript beneath it.

Benefits of a Macrobiotic Diet for Diabetes

Why are macrobiotic diets apparently so effective at reducing blood sugar levels in diabetes, within just a few weeks time? Because the diet is centered around whole grains—brown rice, barley, and millet? Maybe the high fiber intake is improving the gut microbiome, the friendly flora in the colons of diabetics, and that’s leading to a reduction in insulin resistance? Or, maybe because it also has lots of vegetables, it’s correcting some kind of low-grade acidosis from the high levels of animal protein in their regular diets? Regardless, this was after just 21 days. Can macrobiotic diets also help with longer-term blood sugar control?

How about a six-month dietary intervention with wildly out-of-control blood sugars? Hemoglobin A1c offers a sense of one’s average blood sugars over the previous few months. So, an A1c level of 5 would mean over the last few months, your blood sugars have been in the double digits most of the time, meaning your sugars have been normal, healthy, non-diabetic. But an A1c of like 6 is pre-diabetes territory, and 6-and-a-half can be a sign of full-blown diabetes. But under 7 is considered controlled diabetes—that’s what diabetics are striving towards with pills and insulin injections. And anything over 7 is considered out-of-control diabetes. The average A1c level in the macrobiotic diet study started out off the charts at 12.6, meaning for months they had been averaging blood sugars in the 300s, despite all being on insulin injections.

But then, they were placed on this so-called Ma-Pi 2 diet, a strictly plant-based macrobiotic-style diet centered around whole grains, vegetables, and beans, with some sesame seeds and green tea. What happened? A1c levels started out with a wildly out-of-control diabetic 12.6, despite daily insulin injections, and after six months eating that diet, ended up averaging a non-diabetic 5.7. And, are you ready for this? That was after they all were able to eliminate their insulin.

They went from 100% on insulin with out-of-control diabetes to 0% on insulin averaging non-diabetic blood sugars. That’s the power of plants. And three-quarters were off all their diabetes medications completely—in just six months’ time. And what are the side effects? How about LDL-cholesterol dropping 20%, triglycerides dropping nearly 40%—though, of course, anyone starting a strictly plant-based diet must ensure a regular, reliable source of vitamin B12.

All we need now is a randomized, controlled trial, and here it is. Type 2 diabetics randomized to the macrobiotic diet versus the recommended like American Diabetes Association-type diet. So, here’s an example of a typical day on the macrobiotic diet: a savory whole grains cake for breakfast with green tea, with brown rice sesame balls for a snack; lunch was a vegetable millet soup and brown rice salad, with lots of vegetable sides, and adzuki beans, more whole grain snacks; and a dinner similar to lunch: vegetable barley soup, lots of vegetables, chickpeas, green tea throughout the day.

Whereas the more standard diabetic-diet group got a day like this: low-fat milk, whole wheat bread, kind of a Mediterranean lunch with vegetables and beans, fruit for a snack, and a bean-and-vegetable soup, whole grain bread, agretti (like a green leafy vegetable), and baked fish. I have to say that’s a pretty healthy control diet. I mean, they could have compared it to some trashy diet, but they wanted to be like look, this is what the diabetes groups say is best, so let’s stack our diet against theirs. Okay, so what happened?

The macrobiotic diet won out on every measure of blood sugar control. Check out these numbers. They all started out with fasting blood sugars in the 120s. That’s bad, but they were, after all, diabetics. Normal fasting blood sugars, like when you wake up in the morning before breakfast, should be at least double digits, under a hundred. When they put people on this relatively healthy Diabetes Association diet, their blood sugars got better over the three-week study, from the 120s down into the one teens. So, that’s like the best the official diabetes-recommended diets can do.

Compare that to an isocaloric macrobiotic diet, meaning the same number of calories. This is what the macrobiotic diet did—better within days, and hitting normal fasting blood sugars within a week. 100% of those on the macrobiotic diet got down to at least under 110, whereas less than half of those on the diabetes diet did. And, this was on fewer drugs. In the control group, one person was able to reduce their oral hypoglycemic medications, whereas five of the seven on such drugs in the macrobiotic group had to stop taking them—otherwise their blood sugars would have fallen too low. So, better results on fewer drugs. That’s the power of a really healthy diet.

And, just as an aside, what a poke in the eye with a sharp stick this study was to the low-carb crowd. They took diabetics and put them on a 73% carbohydrate diet, adding a hundred grams of carbs to their daily diet, and in the form of grains. And what happened? Did their blood sugars skyrocket out of control? No, they got better—significantly better in a matter of days, with average fasting blood sugars starting out at 129 and falling to 95, and, holy moly, look at their LDL cholesterol, down to 62, a nearly 48% drop, in three weeks.