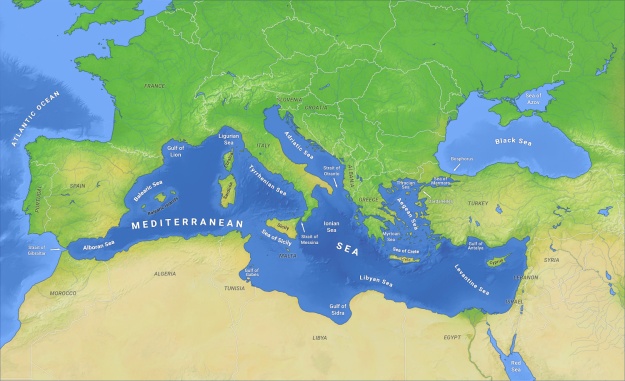 I’m curious about the Mediterranean Diet. Everywhere I look, fruits, vegetables, and beans are on the list. But I also see copious amounts of oil, more nuts than the average person can afford, alcohol every day, sometimes several times a day, and daily servings of meat, fish, eggs, and/or dairy. Something doesn’t make sense. All this animal food and fat and alcohol shouldn’t equate with health. I also have a hard time believing that the Mediterranean region which has been ravaged by war for hundreds of years supported populations that were so prosperous they could eat this way. Historically, eating animal food was a luxury. Also, many descriptions of the Mediterranean diet say to avoid processed foods but many others include bread and pasta which are processed foods. There doesn’t seem to be a clear definition. What exactly is the Mediterranean Diet? Is it really healthful? I’ll be exploring the answer over several posts.

The 7 countries in Keys’ Seven Countries Study were:

The Seven Countries Study was formally started in fall 1958 in Yugoslavia. In total, 12,763 males, 40–59 years of age, were enrolled as 16 cohorts, in seven countries, in four regions of the world (United States, Northern Europe, Southern Europe, Japan). One cohort is in the United States, two cohorts in Finland, one in the Netherlands, three in Italy, five in Yugoslavia (two in Croatia, and three in Serbia), two in Greece, and two in Japan. The entry examinations were performed between 1958 and 1964 with an average participation rate of 90%, lowest in the USA, with 75% and highest in one of the Japanese cohorts, with 100%. The study has continued for more than 50 years.

4 thoughts on “What Is The Mediterranean Diet? I Aim To Find Out.”