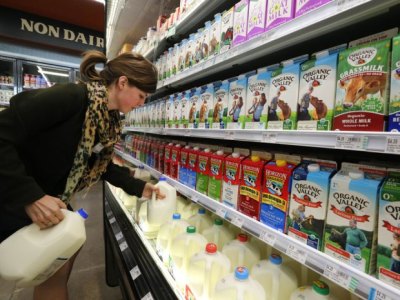 Jane Plant, UK scientist and 6-time cancer survivor: “We have all been brought up with the idea that milk is good for you,” says Plant. “But there is evidence now that the growth factors and hormones it contains are not just risky for breast cancer, but also other hormone-related cancers, of the prostate, testicles and ovary.” … For those with cancer or at high risk of the disease, Plant advocates, among other things, cutting out all dairy — from cows, sheep, and goats, organic or not. “If you have active cancer, there are no half-measures here.”- Source

I can’t believe this article made it into a professional peer-reviewed journal, especially that “Future Directions” section I excerpted. It must be because it’s from Germany. The dairy lobbies here in the US would never allow something like this to be published. (123 references!)

Milk Consumption: Aggravating Factor Of Acne And Promoter Of Chronic Diseases Of Western Societies, Journal of the German Society of Dermatology, April 2009

It says … compounds in milk are very potent growth promoters. That’s good when we’re very young, but not so good when we get older. This growth promotion, or “milk-induced change of the IGF-1-axis” is at the heart of not just cancer but atherosclerosis, which leads to heart attack and stroke, and neurodegenerative diseases such as multiple sclerosis, Parkinson’s and Alzheimer’s disease:

Summary
Consumption of cow’s milk and cow’s milk protein result in changes of the hormonal axis of insulin, growth hormone and insulin-like growth factor-1(IGF-1) in humans. Milk consumption raises IGF-1 serum levels in the perinatal period, adolescence and adulthood. During puberty with the physiological onset of increased secretion of growth hormone, IGF-1 serum levels increase and are further enhanced by milk consumption. IGF-1 is a potent mitogen; after binding to its receptor in various tissues, it induces cell proliferation and inhibits apoptosis. Keratinocytes and sebocytes, as well as the androgen-synthesizing adrenals and gonads, are stimulated by IGF-1. The epidemic incidence of adolescent acne in Western milk-consuming societies can be explained by the increased insulin- and IGF-1-stimulation of sebaceous glands mediated by milk consumption. Acne can be regarded as a model for chronic Western diseases with pathologically increased IGF-1-stimulation. Many other organs, such as the thymus, bones, all glands, and vascular smooth muscle cells as well as neurons are subject to this abnormally increased hormonal stimulation. The milk-induced change of the IGF-1-axis most likely contributes to the development of fetal macrosomia, induction of atopy, accelerated linear growth, atherosclerosis, carcinogenesis and neurodegenerative diseases. Observations of molecular biology are supported by epidemiologic data and unmask milk consumption as a promoter of chronic diseases of Western societies.

The first few sentences in this next section are ominous. I can’t imagine reading them in JAMA or the New England Journal of Medicine. Is it time to reconsider the ingestion of any milk past infancy?

Future Directions
Our deeply-rooted beliefs about the wholesomeness of milk and dairy products should be re-considered under careful, scientific evaluation. We are just beginning to re-assess the biological effects of milk and dairy products as foodstuffs. Human beings are the only species on earth that from the beginning of the perinatal period into adulthood are subjected to external hormonal manipulation of IGF-1-dependent maturation and differentiation processes in various cell and organ systems. Milk developed over the course of mammalian evolution as a highly complex, biologically active carrier of signals which was intended only to be consumed during infancy. The consumption of cow’s milk [in humans] interferes with the sensitive endocrine regulatory network from the fetal period into old age.

It is time to look beyond milk as merely a positive stimulant of bone growth and instead to take all organ systems into account. Milk consumption during pregnancy, in particular, should be carefully evaluated; intrauterine changes in the regulatory axes can negatively impact later life, predisposing a person to chronic diseases. Persistent acne in adulthood, especially in PCOS, should be cause for assessing IGF-1 levels and should raise the possibility of an increased risk of cancer. Given the tumor promotor effect of IGF-1, patients with tumorous disease should restrict consumption of milk and milk protein. The same applies to patients with coronary heart disease and with a family history of neurodegenerative disease. Milk consumption has already been identified as an aggravating factor in the acne “epidemic” among adolescents, and preliminary successes have been reported with reduced milk consumption. It is even more important that excessive milk consumption can promote diseases commonly associated with a Western lifestyle. (Table 1).

Here’s their Table 1. This is what people risk by continuing to eat cheese, pizza, yogurt, milk. Look at how many organs are affected.