I’m reposting this because I just made them again, probably the 20th time this year, and I added an ingredient that makes them so much better – corn flour! I got the idea from a can of Heinz Baked Beans (ingredients: beans, tomatoes, water, sugar, spirit vinegar, modified cornflour, salt, spice extracts, herb extract). These are the UK version that have half the amount of sugar than that in the American version (7 grams vs. 14 grams). The crazy thing is … Heinz UK version were originally produced here and imported into the UK but now we import them back. Another fun fact which I just learned:

Heinz Baked Beans are produced by sealing raw beans and sauce in the cans, which are then placed in large pressure cookers. This gives the sauce its thick consistency and ensures a long shelf life for the product.

I make them on the stovetop all the time now. It’s faster than baking, less messy, and I like the final product. As to the corn flour, I whiz regular corn meal in a spice grinder for about 20 seconds.
________
Ingredients:

1. Bring beans and about 2 quarts of water to a boil in a heavy pot or dutch oven, on stovetop. Lower heat and simmer for 2 hours or until beans are soft. (Adding salt to the boiling water will keep the beans more intact but I don’t do this because I like them a bit mushy.) Add water to keep level about an inch above beans. Do not drain beans.
2. Preheat oven to 320 degrees.
3. Stir together maple syrup, tomato paste, molasses, mustard, tamari, vinegar, and corn meal liquid if using. Add to beans along with onions. Add spices.
4. Cover pot and bake for 2 to 3 hours (depends on how mushy you like your beans). Check often to stir and add water if getting too dry.

This recipe requires about 4 or 5 hours cooking time, compared to 8-12 hours or overnight, which is more traditional.* You can cut the time by precooking the beans on the stovetop before adding maple syrup, tomatoes, vinegar and other ingredients that slow bean softening. Daniel Gritzer explains this and much more in his post:
How to Make Boston Baked Beans, the Low, Slow, Old-Fashioned Way, Serious Eats, 2016

You can also cook everything on the stovetop and not use the oven. Just add the onion after about 2 or 3 hours, let that cook with the beans for 30 minutes, then add the ingredients in number 3 above. Continue simmering for about 20-30 minutes depending on how thin or thick you want the final product. I’ve done both oven and stovetop and can comfortably say that all-stovetop is not inferior.

A tradition in Maine, of “bean hole” cooking, may have originated with the native Penobscot people and was later practiced in logging camps. A fire would be made in a stone-lined pit and allowed to burn down to hot coals, and then a pot with 11 pounds of seasoned beans would be placed in the ashes, covered over with dirt, and left to cook overnight or longer. These beans were a staple of Maine’s logging camps, served at every meal. 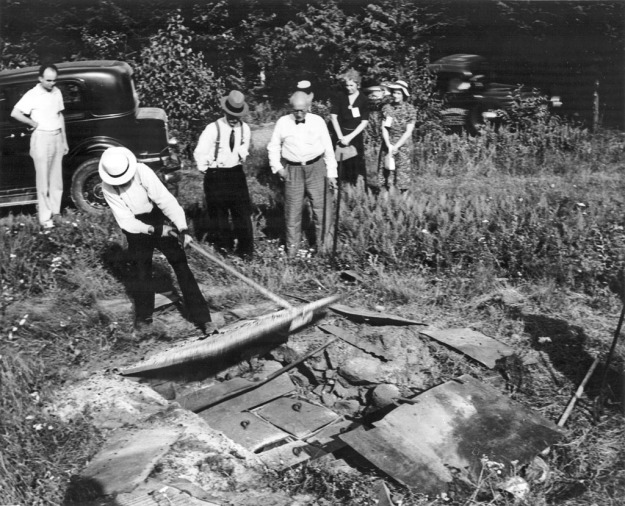 “Removing the cover of the bean hole at an early convention [Springfield Telescope Makers, Vermont], likely in the 1930’s.” Source: Stellafane.org