Here’s a chart about something people don’t like to talk about, bowel movements: 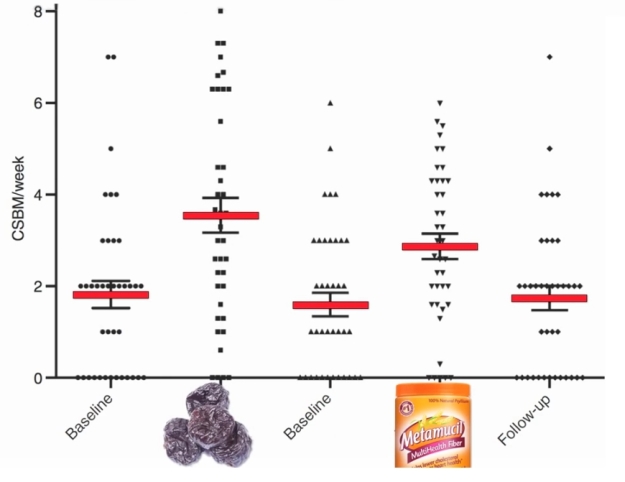 Each dot represents the number of complete spontaneous bowel movements (CSBM)/week. Note how many people had zero bowel movements per week before the study started (baseline). Paticipants were between 18 and 75 years old and reported mild to moderate constipation.

Before any intervention, people were averaging about 1.7 bowel movements per week. While taking psyllium (Metamucil) that increased to 2.8 times/week. On prunes it increased to 3.5 times/week. Prunes won, don’t tell Metamucil.

Conclusion: Dried plums are safe, palatable and more effective than psyllium for the treatment of mild to moderate constipation, and should be considered as a ﬁrst line therapy.

The intervention lasted 3 weeks, They were eating either:

The graph is a screen cap from Greger’s video:

5 thoughts on “Prunes Better Than Psyllium Fiber For Constipation”