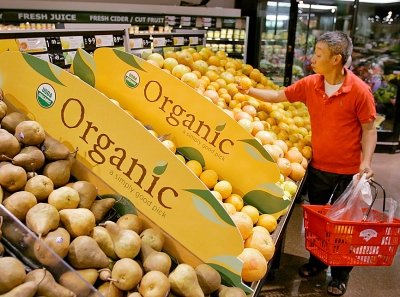 Glad to see someone in the organic community recognize income inequality as a reason for poor organic food sales.  Ronnie Cummins from the Organic Consumers Association (OCA) asked:
What’s Holding Back The Organic Revolution?, OCA, 20 August 2014

“Organic and climate-friendly food today represent no more than 3% of combined U.S. grocery and restaurant sales.”

“If the overwhelming majority of U.S. consumers say they prefer organics and would like to buy and consume healthier and more sustainable food, then why aren’t they doing so?”

“[Reasons] include the addictive nature and omnipresence of “chemically engineered” processed foods; lack of money and time; rampant nutrition and cooking illiteracy; and labeling fraud.”

I don’t think American consumers are illiterate about cooking or nutrition or labeling. The reason an “overwhelming majority of U.S. consumers say they prefer organics and would like to buy and consume healthier and more sustainable food” is because they are not illiterate. There is knowledge, it’s just not accompanied by behavior. Why not?  I think the most potent reason among Cummins’ list is “lack of money.” I won’t even say lack of time because if you have enough money you can buy others’ time. You can either purchase prepared food or arrange to have someone at home doing the food preparation.

As to his first reason, I think sales of processed foods with nefarious ingredients would decline if demand for them declined, which becomes possible when people are able to purchase what they say they prefer.

The solution for lack of money? Cummins said:

“But in fact U.S. organic and grass fed foods (especially non-processed organic foods) would not be that “expensive” if we lived in a society where there were meaningful and sustainable jobs for everyone willing to work; where the minimum wage was $15 an hour, rather than $7.25 (federal); where healthcare costs were not double what they are in other industrialized nations; and where rent, mortgage, educational and transportation costs were more affordable.

The solution to the relative “high costs” of organics in comparison to so-called conventional food is not to pay organic farmers, ranchers or food chain workers less money, but rather to raise the standard of living of everyone, so that Americans can afford to go organic and take control of their health.”

There’s a multitude of factors that affect people’s food choices. Even though Cummins says the majority of consumers prefer organic, I don’t think increasing their standard of living will in and of itself cause them to buy organic. It would, however, remove an obstacle.

The economist, best-selling author, and former Secretary of Labor, Robert Reich says reducing income inequality would benefit not just the currently strained and slowly disappearing middle class (who want to buy organic, and a lot of other things, but can’t), but those at the top too. Increasing the middle class’ purchasing power would create jobs, generate tax revenue, and grow the economy … everything that’s good for business.1

Obama was correct in December when he called widening inequality “the defining challenge of our time.” 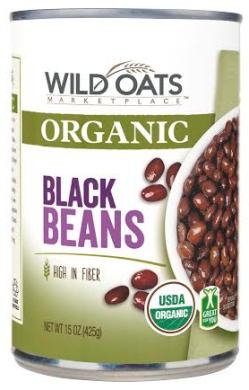 “Starting this month, the big box giant aims to drive down the price of organic food nationwide with its new in-house line of 100 or so products in exclusive partnership with Wild Oats, a pioneering health brand of the 1980s.

Walmart’s new Wild Oats organic products — including kitchen cupboard staples like olive oil and black beans — will cost about 25 percent less than those sold by competitors, based on price comparisons of 26 national brands.”

“There’s no difference in the nutritional quality [of organic] as opposed to conventionally farmed.”

As you know, that’s not true. Just one example: my previous post describes a study that found alpha-tomatine, a naturally-occurring compound which fends off sarcopenia or muscle wasting, “is higher in organically grown tomatoes compared to conventionally grown tomatoes.”

This was interesting, from Reuters:

That’s not much, and it all but completely excludes the low-income sector: “Organic foods often cost more than their conventional rivals, and that has limited purchases by the legions of lower-income U.S. shoppers.”

This move by Walmart will increase access to organics.  If it ends up increasing demand, that would have several outcomes (at least on food), some desirable, some not so. It could erode the way organic food is currently produced (however, that is regulated by the USDA’s National Organic Standards Board) or it could put pressure on conventional agriculture to employ more organic and sustainable methods. I think both will happen.