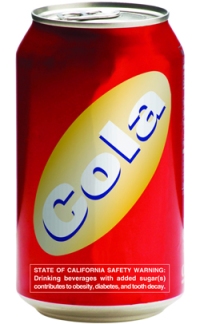 It’s a shame that sweetened beverages are being singled out. I would like to see a similar label on meat:

Why? Because meat-eating is a risk factor for developing diabetes:
Meat Consumption As A Risk Factor For Type 2 Diabetes, Nutrients, February 2014

Researchers evaluated studies that examined different amounts and types of meat consumption and the risk for developing diabetes. They found that meat-eaters had a significantly higher risk of developing diabetes compared with non-meat-eaters. Here’s a chart summarizing the results of one of the included studies, Type of Vegetarian Diet, Body Weight, and Prevalence of Type 2 Diabetes, Diabetes Care, 2009: 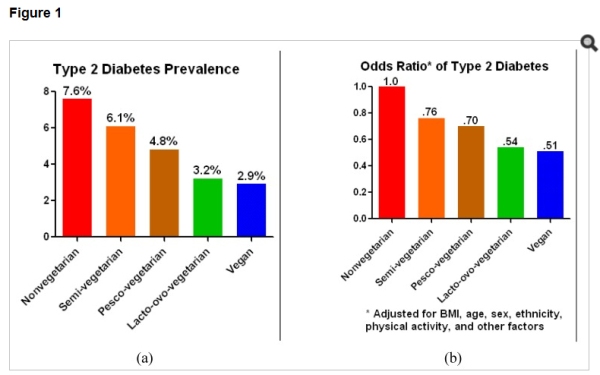 Do you think a meat label could come to pass? There certainly is enough justification for it.

The following graphs are from:

The paper is not objective, but I found the data compelling.

Figure 1 shows that consumption of America’s top 2 sweeteners have either remained constant or dropped off as obesity rates continued to climb.

Figure 1
Historical trends in sucrose and high-fructose corn syrup (HFCS) consumption (availability) versus rates of obesity in adults. After significant gain in market share at the expense of sucrose, HFCS consumption has been decreasing since 1999 and there is no correlation with obesity. From USDA Economic Research Service per capita consumption data, adjusted for loss and WHO Global Database on BMI. 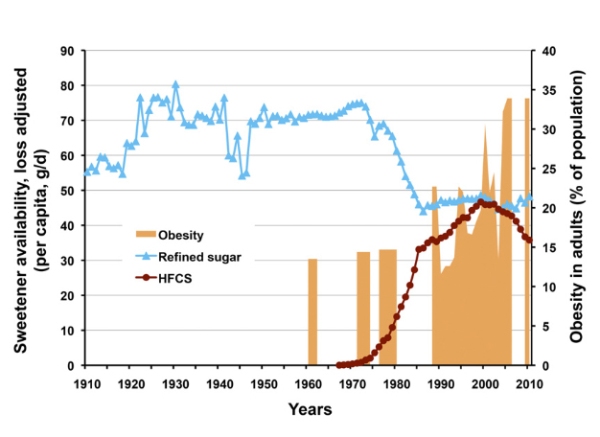 Figure 1 may be misleading, because if you add refined sugar and HFCS, along with other caloric sweeteners, there is a trend that aligns with obesity,* at least to about the year 2000. 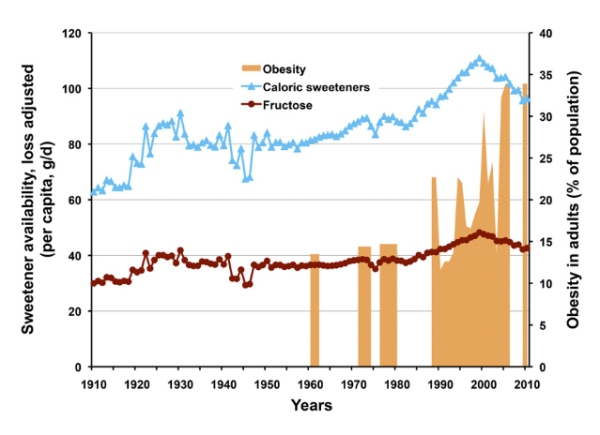 So, what happened in 2000 that might have contributed to increasing obesity rates, if it wasn’t sugar? Look at the blue line in the graph below.

Figure 2
Commodity group energy intakes, 1970–2010. Added sugars contribution to the 449 kcal/d increase in per capita energy intake over this period was small in comparison with flour-cereal products and added fats, accounting for less than 8% of the increase. Added sugars intake has been decreasing since 1999. From USDA Economic Research Service average daily per capita energy from the U.S. food availability, adjusted for loss. 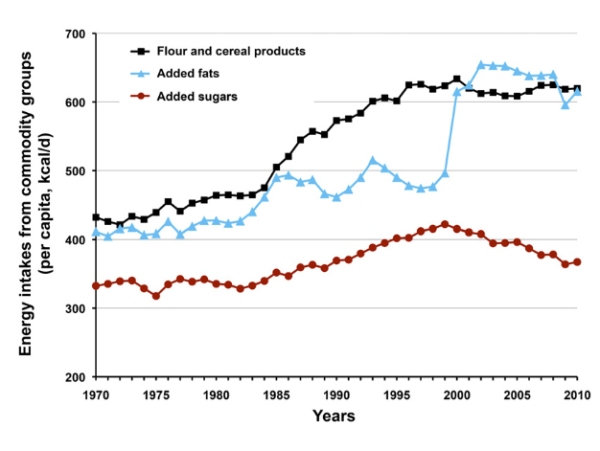 I don’t think sugar is “toxic” as Gary Taubes claims, or a “poison” as Robert Lustig claims. Sugar is a carbohydrate; humans have evolved to eat carbohydrates.

I do think that “foods” that have been isolated, processed, and added to products in amounts not seen in nature can be detrimental. I feel this way about fats and proteins too. (And about supplements.) It’s not good to eat a salad swimming in oil, or to add protein powder to a smoothie, just as it is not good to consume a beverage with 20 spoonfuls of sugar.

* It’s important to note that this trend occurs against the backdrop of a high-fat diet.  You have to look at the whole diet.  Diets high in both fat and refined carbohydrates, including sugar, contribute not just to weight gain (“Wate-On” and “Ensure” and, of course, Wate-On’s Competition) but to increased risks for chronic diseases, notably diabetes and heart disease. Cubans lost weight and lowered their rates of diabetes, heart disease, and cancer by eating a diet of primarily rice and sugar, with very little fat, just 13%! 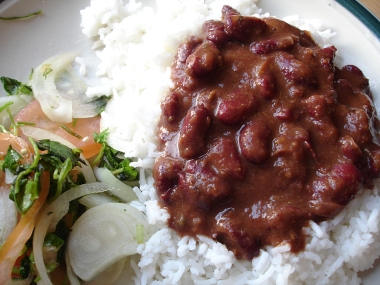 Rice and beans, a staple food of many cultures around the world.

Dr. McDougall, in his March 2009 newsletter, discusses “de novo lipogenesis,” a term that describes the pathway for converting dietary carbohydrate into body fat. He says the pathway is not utilized much in humans, that “excess starch does not turn to body fat.” He provides several references to support his claim. They do indeed back the notion that excess carbohydrate or replacement of dietary fat by carbohydrate does not induce de novo lipogenesis to any substantial degree.

“A widely held belief is that the sugars in starches are readily converted into fat and then stored unattractively in the abdomen, hips, and buttock. Incorrect! And there is no disagreement about the truth among scientists or their published scientific research.5-13 After eating, the complex carbohydrates found in starches, such as rice, are digested into simple sugars in the intestine and then absorbed into the bloodstream where they are transported to trillions of cells in the body in order to provide for energy. Carbohydrates (sugars) consumed in excess of the body’s daily needs can be stored (invisibly) as glycogen in the muscles and liver. The total storage capacity for glycogen is about two pounds. Carbohydrates consumed in excess of our need and beyond our limited storage capacity are not readily stored as body fat. Instead, these excess carbohydrate calories are burned off as heat (a process known as facultative dietary thermogenesis) or used in physical movements not associated with exercise.9,13

Under experimental laboratory conditions overfeeding of large amounts of simple sugars to subjects will result in a little bit of de novo lipogenesis. For example, trim and obese women were overfed 50% more total calories than they usually ate in a day, along with an extra 3.5 ounces (135 grams) of refined sugar. From this overfeeding the women produced less than 4 grams (36 calories) of fat daily, which means a person would have to be overfed by this amount of extra calories and sugar every day for nearly 4 months in order to gain one extra pound of body fat.10 Obviously, even overeating substantial quantities of refined and processed carbohydrates is a relatively unimportant source of body fat. So where does all that belly fat come from? The fat you eat is the fat you wear.”

That study where women were overfed by 50% is something else. That’s like having them eat 3000 calories/day instead of 2000, in sugar no less. And they put on hardly any body fat. That reminds me of the Cubans during their Special Period, where they lost weight and lowered their rates of diabetes, heart disease, and cancer, by eating a diet of primarily rice and sugar.

Americans (and other rich populations) defeat this by eating a lot of fat. When you add fat to the mix, it’s a whole different ball game. See my posts:
“Meat And Potatoes” Dietary Pattern And Risk For Colon Cancer
High-Fat High-Sugar Dietary Pattern (“Meat & Potatoes”) Linked To Colon Cancer, Diabetes

I ran across McDougall’s discussion of de novo lipogenesis because he took issue with the following statement from that new saturated fat study I keep talking about:

“For example, the influence of metabolism seems particularly relevant for the de novo synthesis of even-numbered saturated fatty acids in the body, compositions of which are largely determined by dietary factors, including carbohydrate and alcohol consumption (33–35), and other metabolic pathways (36, 37) rather than direct dietary intake.”

If carbohydrate intake doesn’t induce de novo lipogenesis to any substantial degree, why would these authors (whose study gave saturated fat consumption the green light) say it does?