Consumer reports (CR) recently tested 47 bottled waters, including 35 noncarbonated and 12 carbonated ones. For each product, we tested two to four samples. The tests focused on four heavy metals (arsenic, cadmium, lead, and mercury), plus 30 PFAS chemicals (of more than 4.700!), which pose special concerns because they can linger in the environment almost indefinitely. [Not to mention, but I will mention the health effects which the CDC says include cancer, liver damage, decreased fertility, and increased risk of asthma and thyroid disease.]

The federal government has issued only voluntary guidance for PFAS.

Most of the noncarbonated products CR tested had detectable levels of PFAS, but only two—Tourmaline Spring and Deer Park—exceeded 1 part per trillion.

All noncarbonated water that CR tested had heavy metal levels well below federal safety limits, with one exception: Starkey Spring Water, owned by Whole Foods. It had arsenic levels just shy of the federal limit of 10 parts per billion and more than three times as much as CR’s recommended level of 3 ppb.

All carbonated water that CR tested fell below legal limits for heavy metals, and none had arsenic levels above CR’s recommended maximum of 3 parts per billion. But many products had measurable amounts of PFAS.

There are a few possible reasons. Phil Brown, at the PFAS Project Lab at Northeastern University in Boston, says the carbonation process could be a factor. The source water could also have more PFAS, or treatment used by some brands doesn’t remove PFAS to below 1 part per trillion.

Brian Ronholm, CR’s director of food policy, says that PFAS in carbonated water highlights the need for the federal government to set science-based limits for PFAS compounds in tap and bottled drinking water. “The fact that so many brands had total PFAS below 1 ppt shows it is feasible to get to more protective levels,” he says. 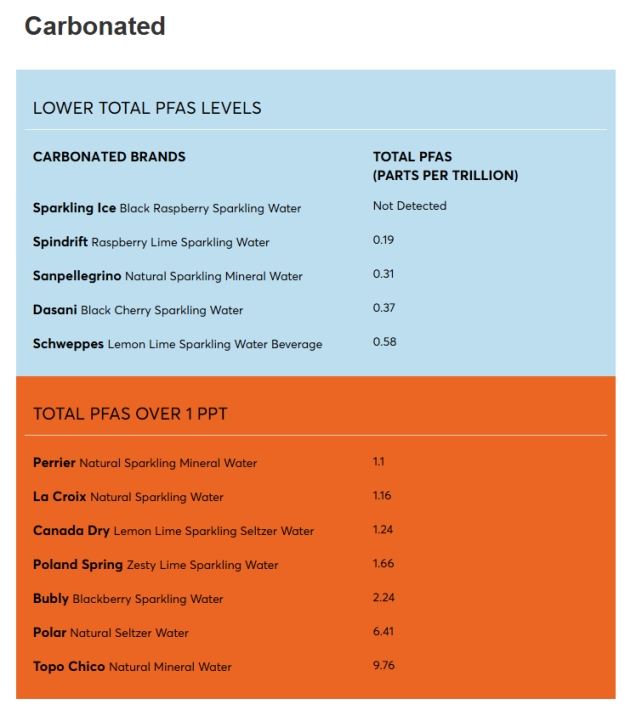 PFAS are a big problem. I’m telling you. And the EPA is not our friend.

A major environmental health study [by the CDC] that had been suppressed by the Trump administration because of the “public relations nightmare” it might cause the Pentagon and other polluters has been quietly released online.

The study upends federally accepted notions for how much of these chemicals are safe for people — recommending an exposure limit for one of the compounds that is 10 times lower than what the U.S. Environmental Protection Agency has maintained is the safe threshold.