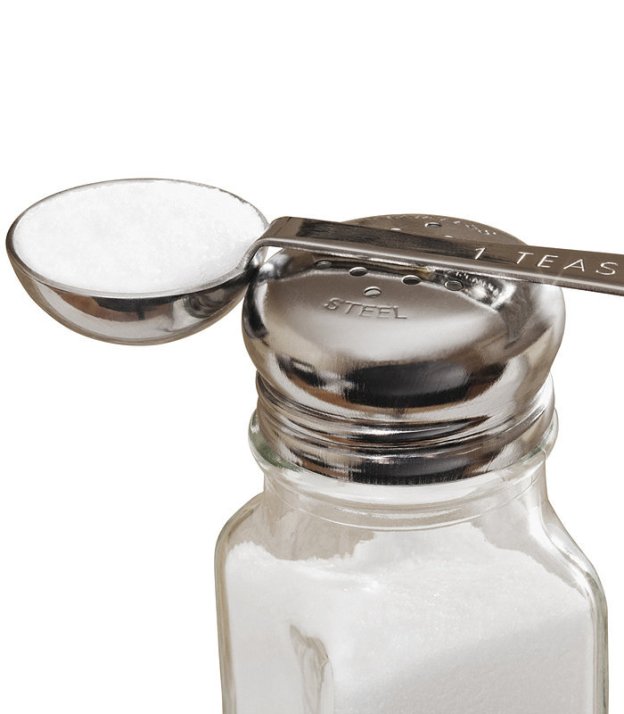 One teaspoon of table salt, which is a combination of 40% sodium and 60% chloride, has 2,325 milligrams (mg) of sodium. That’s slightly more sodium than the recommended upper limit of 2,300 mg per day.

Sodium is an essential nutrient, but vegetables and other natural foods provide the small amounts of sodium you need in your diet. If you consume too much, it can cause water retention, and your body may respond by raising your blood pressure to push the excess fluid and salt out of your system.

For the first 90 percent of human evolution, we likely ate diets containing less than the equivalent of a quarter teaspoon of salt’s worth of sodium a day.

Humans seem to be genetically programmed to eat ten times less sodium than we do now. Many so-called low-salt diets can actually be considered high-salt diets [A low-sodium diet is about 1500 mg sodium/day, bit more than half a teaspoon].

If we could cut our salt intake by about a half teaspoon a day, which is achievable by avoiding salty foods and not adding salt to our food, we might prevent 22 percent of stroke deaths and 16 percent of fatal heart attacks. That’s potentially more lives saved than if we were able to successfully treat people with blood pressure pills.

Even just a single meal can do it. If we take people with normal blood pressure and give them a bowl of soup containing the amount of salt that may be found in an average American meal, their blood pressure climbs over the next three hours compared to eating the same soup without any added salt. Dozens of similar studies demonstrate that if you reduce your salt intake, you may reduce your blood pressure. And the greater the reduction, the greater the benefit may be.

In addition to high blood pressure, salty meals can significantly impair artery function, even among people whose blood pressure tends to be unresponsive to salt intake. In other words, salt itself can injure our arteries independent of its impact on blood pressure. And that harm begins within thirty minutes.

This flies in the face of trying to get iodine from iodized salt, doesn’t it. Morton salt says it contains 68 mcg in a 1/4 teaspoon. Even a half teaspoon of iodized salt doesn’t meet the RDA for iodine (150 mcg). And canned foods, breads and other baked goods, pickled foods, prepared foods … they all contain salt but not the iodized version. Then there’s the non-salty tasting sodium in food: baking soda, baking powder, and anything that says “sodium” in the ingredient list, like sodium nitrate or monosodium glutamate (MSG).