Here are all the studies Greger cites in his video. It’s worth watching; he condenses the core message in these 14 studies into a 6-minute, easy-to-understand video. (Transcript at the bottom.)

Low Protein Intake Is Associated With A Major Reduction In IGF-1, Cancer, And Overall Mortality In The 65 And Younger But Not Older Population, Cell Metabolism, March 2014

This study provides the most comprehensive nitrogen balance–based assessment of the protein needs of older men and women ever published. The results indicate that the requirement for dietary protein is not different between apparently healthy younger and older adults, and that the recommended dietary allowance of 0.8 g protein · kg body wt−1 · d−1 is adequate to meet the minimum dietary needs of virtually all older persons.

Is The Optimal Level Of Protein Intake For Older Adults Greater Than The Recommended Dietary Allowance?, The Journals of Gerontology: Series A, June 2013

Conclusion: Consumption of diets that contained moderately higher protein … did not differentially affect body composition, skeletal muscle fiber size, or serum lipid-lipoprotein profile responses to resistance training in older people. (Study funded by American Egg Board. If they could have promoted eggs, they would have!)

Dietary Protein And Resistance Training Effects On Muscle And Body Composition In Older Persons, Journal of the American College of Nutrition, December 2007

Most of the limited research suggests that resistance training-induced improvements in body composition, muscle strength and size, and physical functioning are not enhanced when older people who habitually consume adequate protein (modestly above the RDA) increase their protein intake by either increasing the ingestion of higher-protein foods or consuming protein-enriched nutritional supplements. (Study funded by the National Dairy Council. Again, if they could have promoted dairy, they would have!)

Association Between Healthy Diet And Exercise And Greater Muscle Mass In Older Adults, Journal of the American Geriatrics Society, April 2015

The alkalizing effects of vegetables may neutralize mild metabolic acidosis, which has catabolic effects on muscle.

Muscle wasting appears to be an adaptive response to acidosis.

Diet-induced Acidosis: Is It Real And Clinically Relevant?, British Journal of Nutrition, December 2009

Chronic ‘low-grade’ acidosis is thought to be brought about primarily by two factors: advancing age with a consequent decline in renal function, and diet, which may promote acidosis by both its net acid load, as well as its sodium chloride content.

This study found a more alkaline diet was positively associated with muscle mass in women suggesting a role for dietary acid–base load in muscle loss.

That study that purported to show that diets high in meat, eggs, and dairy could be as harmful to health as smoking supposedly suggested that people under 65 who eat lots of meat, eggs, and dairy are four times as likely to die from cancer or diabetes. But if you look at the actual study, you’ll see that’s simply not true. Those eating lots of animal protein didn’t have four times more risk of dying from diabetes; they had 73 times the risk.

These results suggest that low protein intake during middle age, followed by moderate to high protein consumption in old adults, may optimize healthspan and lifespan. Some have suggested that the standard daily allowance for protein, 0.8 grams of daily protein for every healthy kilogram of body weight, may be fine for most, but maybe older people require more.

This is the study upon which the RDA was based, and though there was a suggestion that the elderly may have a somewhat higher requirement, there is just not enough evidence to make different recommendations. The definitive study was published in 2008, and it found no difference in the protein requirements between young and old. The same RDA should be adequate for the elderly.

But adequate intake is not necessarily optimal intake. The protein requirement studies don’t address the possibility that protein intake well above the RDA could prove beneficial—or so suggests a member of the Whey Protein Panel, and a consultant for the National Cattlemen’s Beef Association.

If you follow sedentary individuals over the age of 65, they lose about 1% of their muscle mass every year. If you force people to lie in bed all day for days at a time, anyone would lose muscle mass. But older adults may lose muscle mass on bed rest six times faster than young people. So, it’s use it or lose it for everyone, but the elderly appear to lose it faster; so, they better use it.

The good news is, in contrast to the 12-year U.S. study, a similar study in Japan found that the age-related decreases in muscle mass were trivial. Why the difference? It turns out the participants were informed about the results of their muscle strength; and so, often tried to improve it by training before the next exam for the study—especially the men, who got so competitive their muscle mass went up with age, which shows that the loss of muscle mass with age is not inevitable; you just have to put in some effort.

And, adding protein does not seem to help. Adding more egg whites to the diet did not influence the muscle responses to resistance training—and that’s based on studies funded by the American Egg Board itself. Even the National Dairy Council couldn’t spin it; evidently, strength training induced improvements in body composition, muscle strength and size, and physical functioning are not enhanced when older people increase their protein intake by either increasing the ingestion of higher-protein foods, or taking protein supplements.

Is there anything we can do, diet-wise, to protect our aging muscles? Vegetables. Consuming recommended levels of vegetables was associated with cutting the odds basically in half of low muscle mass. Why? The alkalizing effects of vegetables may neutralize the mild metabolic acidosis that occurs with age, and, you know, it may be that little extra acid in our body that facilitates the breakdown of muscle.

I’ve talked about this before, how muscle wasting appears to be an adaptive response, to acidosis. We appear to get a chronic low-grade acidosis with advancing age because our kidneys start to decline, and because we may be eating an acid-promoting diet—which means a diet high in fish, pork, chicken, and cheese, and low in fruits and vegetables. And, as you can see, beans and other legumes are the only major source of protein that’s alkaline- instead of acid-forming. And indeed, a more plant-based diet, a more alkaline diet, was found to be positively associated with muscle mass in women aged 18 through 79 years old.

So, if we are going to increase our protein consumption after age 65, it would be preferable to be plant-based proteins to protect us from frailty. No matter how old we are, a diet that emphasizes plant-based nutrition is likely to maximize health benefits in all age groups.

Related:
How To Preserve Muscle And Bone As We Age: Eat Less Meat And Dairy, More Fruits And Vegetables

Here’s a chart Greger included in his video. You want to eat more foods on the right side and fewer foods on the left. The effects of an alkaline diet are so good at preserving muscle that athletes are known to supplement with sodium bicarbonate, a.k.a. baking soda. Eating a plant-based diet gives you that benefit without all the sodium and stomach upset. 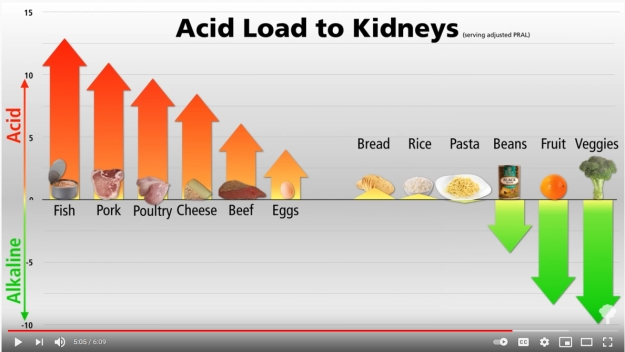 1 thought on “Increasing Protein Intake After Age 65: Not Necessary, May Be Harmful”