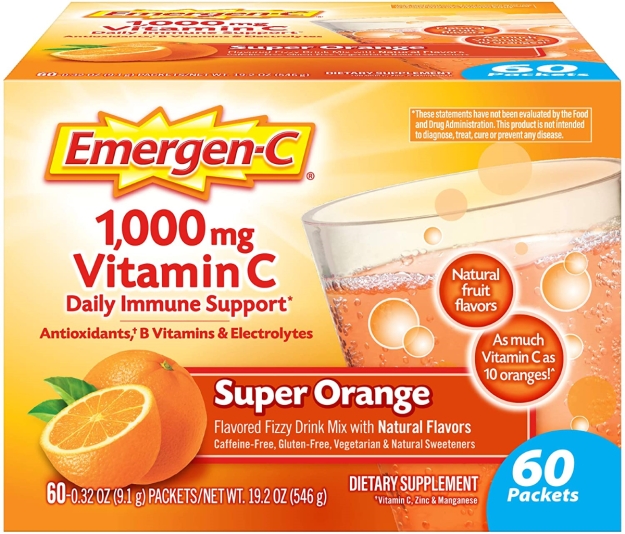 1000 milligrams, a gram, of vitamin C is a lot. The RDA is 75 mg (women), 90 mg (men). An orange has about 60 mg. Studies are finding that vitamin C can inhibit the body’s natural ability to adapt to exercise, blunting the body’s ability to produce its own powerful antioxidants.

Below is an excerpt from a post from my old blog, from February 2009. I’m revisiting it because I just read that a high-end supplement for athletes removed vitamin C from some of their formulations, citing this study and others.

2. Vitamin C reduced the number of mitochondria (energy-producing cells) that bodies make in response to exercise.

The graph below shows the change in level of transcription factors needed for mitochondrial production. Look at the vitamin C group – almost equal to levels in untrained rats. 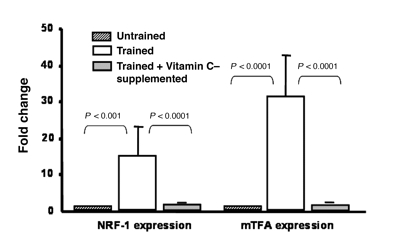 The number of mitochondria is linked to endurance and fatigue. (See No. 1 above.)

Endurance capacity [time to fatigue] is dependent mainly on the mitochondrial content of skeletal muscle.

3. Vitamin C reduced the amount of endogenous (made by our body) antioxidants.

Two antioxidant enzymes, superoxide dismutase and glutathione peroxidase (GP), were found in lower levels in those taking vitamin C. Recall that acrylamide in browned and aged foods is metabolized by GP – a good thing. In fact, GP is widely used in cells to prevent damage from oxidation.

The graph below shows the change in levels of these two antioxidants. Again, the vitamin C group was almost equal to levels in untrained rats. 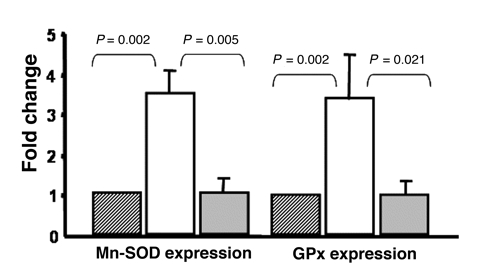 We’re finding that ROS aren’t altogether bad. The body uses them as signals. Previous posts discussed this, e.g. the case of too much selenium reducing ROS leading to insulin resistance and weight gain.

In this case, ROS signals the body to make more mitochondria, and more in-house antioxidants. It probably does other things, but this study measured just those variables.

Thus, the common practice of taking vitamin C supplements during training (for both health-related and performance-related physical fitness) should be seriously questioned.

______
The supplement I mentioned at the top of this post, the one that removed vitamin C from formulations, was First Endurance. Here’s an article they posted which pulls together other studies supporting this hypothesis.

This is not just about athletes. It applies to anyone who exercises to keep fit.