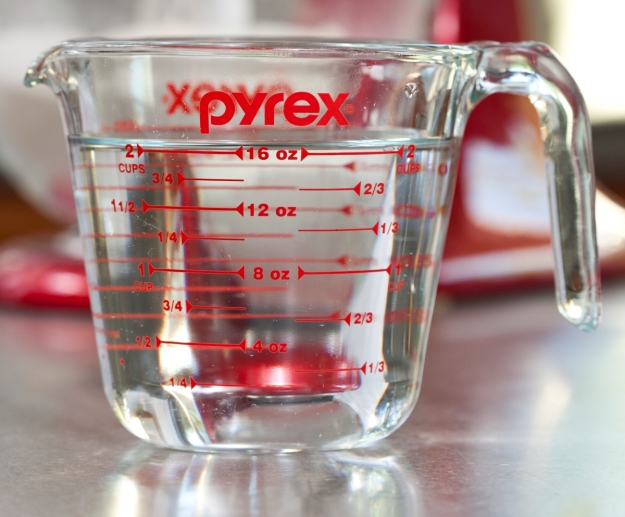 Drinking two cups of plain water can produce “a 60% surge in the adrenal hormone noradrenaline within minutes, as if you just smoked a few cigarettes or downed a few cups of coffee, which boosts your metabolic rate up to 30% within an hour.” – Michael Greger MD.  Photo: Cooks Illustrated

Dr. Greger just posted this video about water and metabolism. The concept is new to me. Beneath the video are 9 studies I pulled from his presentation and a quote or paraphrase about each. Beneath that is the video’s transcript if you’d prefer to read. Greger does a great job of summing this all up in 5 minutes. At the very end are my comments.

The increases in REE [resting energy expenditure] over 90 min post drink found in the two studies conducted in the laboratory of Boschmann et al. [they are the following 2 studies] using the same fixed water volume (500 ml) and same water temperature (21–22°) are uniquely spectacular.

2. Water-Induced Thermogenesis, The Journal of Clinical Endorinology and Metabolism, December 2003

In men, lipids mainly fueled the increase in metabolic rate. In contrast, in women carbohydrates were mainly used as the energy source.

The increase in energy expenditure with water was diminished with systemic β-adrenoreceptor blockade. [So, taking a beta-blocker – say, for high-blood pressure – would defeat this increase in metabolism.]

Results: Only 500 ml water increased energy expenditure by 24% over the course of 60 min after ingestion, whereas isoosmotic saline and 50 ml water had no effect. Heart rate and blood pressure did not change in these young, healthy subjects.

Conclusions: Our data exclude volume-related effects or gastric distension as the mediator of the thermogenic response to water drinking. Instead, we hypothesize the existence of a portal osmoreceptor, most likely an ion channel.

A subsequent rise in REE [resting energy expenditure] was observed, which was significantly higher than baseline after 24 min and at most time points thereafter. Maximal mean REE values were seen at 57 min after water drinking which were 25% higher than baseline.

Indeed, water drinking raises resting energy expenditure in normal weight and obese subjects. The stimulus setting off the response is hypoosmolarity rather than water temperature or gastrointestinal stretch.
…
The increase in metabolic rate with water drinking could be systematically applied in the prevention of weight gain and associated metabolic and cardiovascular risk factors. In essence, water drinking provides negative calories.

Results: Absolute and relative increases in drinking water were associated with significant loss of body weight and fat over time, independent of covariates.

This was an odd study. 50 young women drank 2 cups of water 3 times a day, before meals, in addition to any other beverages. After 8 weeks, the women lost weight, their BMIs went down, they lost body fat. However, you don’t know if all that water before meals affected calorie intake. Also no control group. Nonetheless, they drank water and lost weight without dieting.

9. Efficacy Of Water Preloading Before Main Meals As A Strategy For Weight Loss In Primary Care Patients With Obesity: RCT, Obesity, August 2015

After adjustment, the water preloading group (500 ml 30 min before meal) lost about 1.2 kg (2.6 pounds, not much) more than the comparison group over 12 weeks. Barely reached significance: P = 0.063. However, those who actually DID drink the water 3 times a day lost about 9.5 pounds from baseline.

Given the 60 percent surge in the adrenal hormone noradrenaline within minutes of just drinking two cups of plain water, might one get the weight-loss benefits of noradrenaline-releasing drugs, like ephedra, without the risks? You don’t know until you put it to the test. Published in the Journal of the Endocrine Society, the results were described as “uniquely spectacular.” Drinking two cups of water increased the metabolic rate of men and women by 30 percent. The increase started within 10 minutes and reached a maximum within an hour. In the 90 minutes after drinking a single tall glass of water, the study subjects burned about an extra 25 calories. Do that four times throughout the day and you could wipe out 100 extra calories— more than ephedra! You’d trim off more calories drinking water than taking weight loss doses of the banned substance, ephedrine—the active component of ephedra—three times a day. And we’re just talking about plain, cheap, safe, and legal tap water!

Using the 10-Calorie Rule I explained previously, unless we somehow compensated by eating more or moving less, drinking that much water could make us lose 10 pounds over time. “In essence,” concluded one research team, “water drinking provides negative calories.”

A similar effect was found in overweight and obese children. Drinking about two cups of water led to a 25 percent increase in metabolic rate within 24 minutes, lasting at least 66 minutes until the experiment ended. So, just getting the recommended daily “adequate intake” of water—about 7 cups a day for children ages 4 through 8, and for ages 9 through 13, 8 cups a day for girls and 10 cups for boys—may offer more than just hydration benefits.

Not all research teams were able to replicate these findings, though. Others only found about a 10 to 20 percent increase, a 5 percent increase, or effectively none at all––pouring cold water, one might say, on the whole concept. What we care about, though, is weight loss. The proof is in the pudding. Let’s test the waters, shall we?

Some researchers suggest, “The increase in metabolic rate with water drinking could be systematically applied in the prevention of weight gain….” Talk about a safe, simple, side-effect-free solution—in fact free, in every sense. Drug companies may spend billions getting a new drug to market; surely a little could be spared to test something that, at the very least, couldn’t hurt. That’s the problem, though. Water is a “cost-free intervention.”

There are observational studies suggesting those who drink, for example, four or more cups of water a day appear to lose more weight, independent of confounding factors such as less soda or more exercise. But you don’t really know until you put it to the test.

And finally, in 2013, “Effect of ‘Water Induced Thermogenesis’ on Body Weight, Body Mass Index and Body Composition of Overweight Subjects.” Fifty overweight “girls” (actually women, ages 18 through 23) were asked to drink two cups of water, three times a day, a half hour before meals, over and above their regular water intake, without otherwise changing their diets or physical activity. And, they lost an average of three pounds in eight weeks. What happened to those in the control group? There was no control group, a fatal flaw for any weight loss study due to the “Hawthorne effect,” where just knowing you’re being watched and weighed may subtly affect people’s behavior. Of course, we’re just talking about water; so, with no downsides one might as well give it a try. But I’d feel more confident if there were some randomized, controlled trials to really put it to the test. Thankfully, there are!

Oh, I hate it when the title ruins the suspense. Overweight and obese men and women randomized to two cups of water before each meal lost nearly five pounds more body fat in 12 weeks than those in the control group. Both groups were put on the same calorie-restricted diet, but the one with the added water lost weight 44 percent faster. A similar randomized controlled trial found that about 1 in 4 in the water group lost more than 5 percent of their body weight compared to only 1 in 20 in the control group.

The average weight loss difference was only about three pounds, but those who claimed to have actually complied with the three-times-a-day instructions lost about eight more pounds compared to those only did the extra water once a day or less. This is comparable to commercial weight loss programs like Weight Watchers, and all they did was drink some extra water.

Not cited by Greger but related:
The Pressor Response to Water Drinking in Humans, Circulation, February 2000

Conclusions — Water drinking significantly and rapidly raises sympathetic activity. Indeed, it raises plasma norepinephrine as much as such classic sympathetic stimuli as caffeine and nicotine.

____________
In sum … Drinking a cup or two of water on an empty stomach raises metabolism. Less than that or drinking tea, soda, beer, or other beverage won’t work. Mechanism: When a dilute solution passes over a cell (possibly in digestive tract, liver, or hepatic portal vein), a receptor on the cell’s surface senses that extracellular hypoosmolarity (water is hypoosmotic).

It’s vital that a cell be able to sense what’s going on around it, because:

Either of those sets off a chain of events, e.g.

Also, Did you notice? If your metabolic rate goes up and you produce heat, you need to be burning a fuel. What’s the fuel? It’s different for men and women:

In men, lipids mainly fueled the increase in metabolic rate. In contrast, in women carbohydrates were mainly used as the energy source.