Food and beverage companies frame body weight as a matter of personal choice. Even when we’re not distracted, the power of the “eat more” food environment may sometimes overcome our conscious controls over eating. One look around the room at a dietician convention can tell you that even nutrition professionals are vulnerable to the aggressively marketed ubiquity of tasty, cheap, convenient calories. This suggests there are aspects of our eating behaviors that defy personal insight by flying below the radar of conscious awareness. Appetite physiologists call the result of these subconscious actions “passive overconsumption.”

Remember that brain scan study where the thought of a milkshake lit up the same reward pathways in the brain as substance abuse? That was triggered just by a picture of a milkshake. Dopamine gets released, cravings get activated, and we’re motivated to eat. Intellectually, we know it’s just an image, but our lizard brain just sees survival. It’s just a reflexive response over which we have little control––which is why marketers ensure there are pictures of milkshakes and their equivalents everywhere.

Maintaining a balance between calories in and calories out feels like a series of voluntary acts under conscious control, but it may be more akin to bodily functions such as blinking, breathing, coughing, swallowing, or sleeping. You can try to will yourself power over any of these, but by and large, they just happen automatically, driven by ancient scripts.

Not only are food ads ubiquitous; so is the food. The types of establishments selling food products expanded dramatically in the 1970s and 1980s. Now there’s candy and snacks at the checkout counters of gas stations, drug stores, bookstores, and places that used to just sell clothes, hardware, home furnishings, or building supplies. The largest food retailer in the United States is Walmart. There’s that jolt of dopamine, and the artiﬁcially-stimulated feelings of hunger around every turn. Every day we run the gauntlet.

And it’s become socially acceptable to eat anywhere—in your car, on the street, or packed in a crowded bus. We’ve become a snacking society. Vending machines are everywhere. Daily eating episodes seem to have gone up by about a quarter since the late 1970s––increasing from about four to five occasions a day, potentially accounting for twice the calorie increase attributed to increasing portion sizes. Snacks and beverages alone could account for the bulk of the calorie surplus implicated in the obesity epidemic.

And think of the children. Here we are trying to do the best for our kids, role-modeling healthy habits, feeding them healthy foods, but then they venture out into a veritable tornado of junky food and manipulative messages. This commentary in the New England Journal of Medicine asked why should our efforts to protect our children from life-threatening illness be undermined by massive marketing campaigns from the manufacturers of junk food. Pediatricians are now encouraged to have the “french fry discussion” with parents at the 12-month well-child visit and not wait all the way until year two. And even that may be too late. Two-thirds of infants are being fed junk food by their first birthday.

Dr. David Katz may have said it best in the Harvard Health Policy Review: “Those who contend that parental or personal responsibility should carry the day despite these environmental temptations might consider the implications of generalizing the principle. Perhaps children should be encouraged, but not required, to attend school, and tempted each morning by alternatives, such as buses to the circus, zoo, or beach.”

That quote by Dr. Katz at the end hits the nail on the head.

Anyone who studies public health knows that personal responsibility, when it comes to what we eat, is not the only player in diseases linked to consumption. I often hear, “Nobody puts the food into your mouth.” That’s not entirely true. In an indirect way, others are feeding us. And Dr. Greger makes a great case here for how one group of people, junk food manufacturers, are feeding us. They do it subliminally, through marketing. (Which is only one of the social determinants of health. See: Beyond Health Care: The Role of Social Determinants in Promoting Health and Health Equity

Some other social determinants of health: 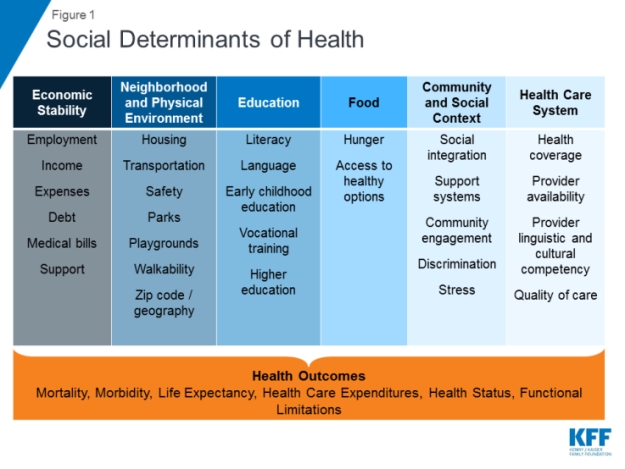 Related:
Protection Of Public Health Is A First Responsibility Of Government, Fanatic Cook, 2010