The conclusion from our analyses is that previous studies using indirect techniques requiring deconjugation underestimated actual human levels of BPA. Accordingly, we undertook a comparative analysis of 29 urine samples from pregnant women in their second trimester using both indirect and direct methods (figure C; appendix pp 1–2). Using the direct method, we obtained a geometric mean for these urine samples of 51·99 ng/mL total BPA, 44-times higher than the latest geometric mean for adults in the USA reported by the National Health and Nutrition Examination Survey (NHANES).10

Importantly, disparity between indirect and direct results increased substantially as exposure increased (figure D and E). Because pregnancy induces physiological changes that might affect metabolism of BPA, we also compared indirect and direct measurements on urine samples from five adult men and five non-pregnant women (figure C). The same trends were evident in this small sample (appendix p 3) and, as in the samples from the pregnant women, the difference in BPA levels was a reflection of the inability of the indirect method to accurately measure the levels of metabolites of BPA.

Indirect analytical methods have provided the bulk of data on human BPA levels. To our knowledge, our data provide the first evidence that this is a flawed analytical tool for measurement of BPA levels.

Importantly, because estimates of human exposure have been based almost exclusively on data from indirect methods, these findings provide compelling evidence that human exposure to BPA is far higher than has been assumed previously.

Because negligible exposure levels have been a cornerstone of regulatory decisions, including the FDA conclusion that BPA poses little health risk, the present data raise urgent concerns that risks to human health have also been dramatically underestimated.

In addition to offering a new dimension to the dispute over the safety of BPA and structural analogues that have replaced it, our findings have broader implications. Currently, measurements of a wide range of chemicals, including replacement bisphenols, other environmental phenols (eg, parabens, benzophenone, triclosan), and phthalate metabolites rely on indirect methods.8 Thus, the problem identified here for BPA might extend to other environmental contaminants.

Look at those graphs! The orange one … the one on the left is what was thought we had in us: negligible. The one on the right is what is actually in us. For that blue-and-purple graph, bottom right, you can’t even SEE the green bar that reflects our presumed load, but it’s there.

Endocrine disruptors are so dangerous because they imitate hormones in our bodies (see below). BPA is a xenoestrogen. You only need a tiny bit of these mimicking hormones to have an effect … like weight gain, insulin resistance and diabetes, impaired mental development in infants (when mother is exposed during pregnancy). It is imperative that we reduce our exposure to these chemicals. 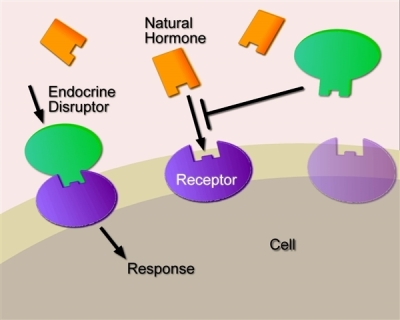 Federal tests ‘dramatically’ undercount BPA and other chemical exposures, Environmental Health News, 6 December 2019
Researchers say federal agencies use highly inaccurate tests to estimate exposure to BPA—findings that extend to multiple other harmful chemicals that get into our bodies.