The top graph shows that during war-related food rationing people died less from diabetes. The bottom graph shows that those lower death rates were attributable to a lower fat, high-carb diet. I transcribed parts that stood out for me. I especially like what he said about immigrants and genetics.

Discussion On The Cause Of Diabetes, Proceedings of the Royal Society of Medicine, May 1949

During wars the diabetic death rate tends to fall. Closer analysis reveals that this is related, not to actual war, but to food shortage, for no such decrease occurs in belligerent countries whose food supplies are unaffected while it falls significantly in neutrals subject to privation. This association is evident in the comparative mortality indices for England and Wales (fig.1) which show that the falls are co-terminous with food restriction rather than hostilities. 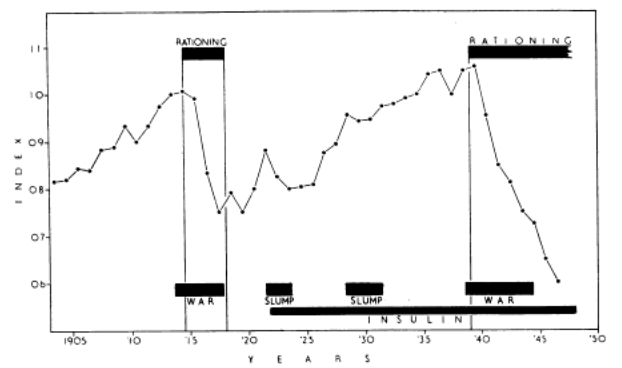 In World War II food restrictions began in 1940 and have not yet been ameliorated. If such restrictions affect mortality a lag time of at least a year would be expected before their effects became manifest. Fig. 2 shows the changes in the daily, per capita, consumption of different foods from the diet of 1939 to the diet of today [2]. Below is given the change in female diabetic mortality; the female rate being chosen as less influenced by mobilization, the curve being antedated one year to allow for the time lag. The protein curve bears no relation to the mortality curve; a possible correlation – direct in one inverse in the other – may exist for the calorie or carbohydrate curves; but the correlation between the mortality and fat consumption curves is striking.

There thus seems to be a universal relation between diet and diabetic mortality. The dietetic factor most closely related is fat consumption.

The general explanation suggested for the data available in 1935 was to the following effect:
[1] Susceptibility and hereditary predisposition undoubtedly play a part in the etiology of diabetes but it is difficult to explain the great variations in diabetic mortality, during the last thirty years, by widespread distributions in the distribution of hereditary susceptibility. A more reasonable explanation is that susceptibility is widespread and that the increasing pressure of some environmental factor is disclosing its prevalence. It seems possible that diet is this external factor. Any population will contain an unknown number of individuals of varying susceptibility. When the diet of their country is rich in carbohydrate and poor in fat it will provoke diabetes only in the most susceptible. But if the diet changes progressively towards a higher calorie, higher fat and lower carbohydrate diet it will provoke diabetes in less and less susceptible individuals and the incidence of diabetes in a population will continue to reflect the dietary habits. The new data presented in this paper strengthen these conclusions.

We’ve known that diabetes is caused by eating too much fat for SEVENTY YEARS. I’ve been writing about it (along with presenting studies) for at least a decade. It is exasperating that people choose not to apply it.

My gratitude goes to Dr. McDougall for highlighting the top graph in his 2012 newsletter which prompted me to read further.