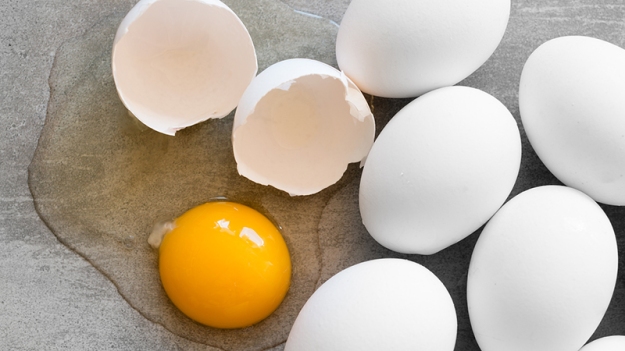 Below are some studies that show an association between eating eggs and risk for type 2 diabetes (and gestational diabetes). Since there is a dose-response relationship – the more eggs you eat the greater your risk for diabetes – I’m going to guess that people who eat just a few eggs a week risk prediabetes, or high blood glucose just short of being diagnosed with type 2 diabetes.

Egg Consumption And Risk Of Cardiovascular Diseases And Diabetes: A Meta-Analysis, Atherosclerosis, August 2013

Conclusions: Our study suggests that there is a dose-response positive association between egg consumption and the risk of CVD and diabetes.

Another review found a 39% higher risk of diabetes in people who ate three or more eggs per week.

Results: We identified 12 cohorts for a total of 219,979 subjects and 8911 cases of DM. … When stratified by geographic area, there was a 39% higher risk of DM (95% CI: 21%, 60%) comparing highest with lowest egg consumption in US studies. …  Elevated risk of DM was observed in US studies among people consuming ≥3 eggs/wk.

Higher egg and cholesterol intakes are associated with increased risk of type 2 diabetes mellitus. However, their association with gestational diabetes mellitus (GDM) has not been evaluated. The authors assessed such associations in both a prospective cohort study (The Omega Study, 1996–2008; 3,158 participants) and a case-control study (The Alpha Study, 1998–2002; 185 cases, 411 controls).

In conclusion, high egg and cholesterol intakes before and during pregnancy are associated with increased risk of GDM.