We probably need to eat between 1 to 2 grams of omega-3 fatty acids a day (as alpha-linolenic acid/ALA because ALA is the only omega-3 that is essential, EPA and DHA can be made from it). That’s a pittance. There are only 9 calories in a gram of fat. NIH: Omega-3 Fatty Acids: 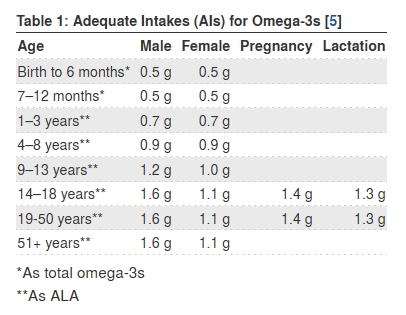 Here are some non-animal foods I looked up on NutritionData. This is their total omega-3 content, most of it is probably ALA. I purposely chose smaller, more realistic serving sizes. What I learned is that ALA can be found throughout the plant kingdom. Even very low-fat foods like spinach and cauliflower contain respectable amounts. For insurance you could eat a few walnuts or a teaspoon of ground flax seed.

EPA and DHA are the longer-chain versions of ALA. The body converts ALA to EPA or DHA by elongating it. That conversion rate varies, but it’s enough that most people don’t need to take supplements:

There are no known cut-off concentrations of DHA or EPA below which functional endpoints, such as those for visual or neural function or for immune response, are impaired.

Several systematic reviews and meta-analyses, including a Cochrane review, have assessed the effects of omega-3 supplementation on cognitive function and dementia in healthy older adults and those with Alzheimer’s disease or cognitive impairment [126,141-143]. Overall, the findings indicate that long-chain omega-3 supplementation [e.g. EPA and DHA] does not affect cognitive function in healthy older adults or in people with Alzheimer’s disease compared to placebo.

You can get too much by supplementing:

High doses of DHA and/or EPA (900 mg/day of EPA plus 600 mg/day DHA or more for several weeks) might reduce immune function due to suppression of inflammatory responses.

I put myself through this exercise because I take issue with Dr. Greger saying vegans require a EPA/DHA supplement, an expensive, contaminant-free, intensively-farmed, algal-based type no less. It’s not necessary. I hope he revisits this.