A couple days ago I posted a letter that Congressman Walker sent to the Secretary of the Navy. Here’s an excerpt:

Based on pilot accounts, encounters with these UAPs often involved complex flight patterns and advanced maneuvering, which demand extreme advances in quantum mechanics, nuclear science, electromagnetics, and thermodynamics. … They could also represent a tremendous opportunity for advancements in science and technology that can contribute to the public good.

I’m not well read on this topic but from what I’ve seen, the Nimitz incident, which occurred in 2004, illustrates the kind of technological advances to which Walker was referring.

The USS Nimitz UFO incident refers to a 2004 radar-visual encounter of an unidentified flying object by US fighter pilots of the Nimitz Carrier Strike Group. In December 2017, infrared footage of the encounter was released to the public.[1][2] The encounter also included an engagement with the UFO by the Commander of the squadron, VFA-41.[3]

I came across the Nimitz incident from this New York Times’ article:
2 Navy Airmen And An Object That ‘Accelerated Like Nothing I’ve Ever Seen’, New York Times, 16 December 2016

The photo below of Commander David Fravor accompanied the article. Fravor, a fighter pilot, appeared in the video in my previous post where he recalled seeing “flying tic tacs” over the Pacific Ocean. This is the story of those tic tacs. 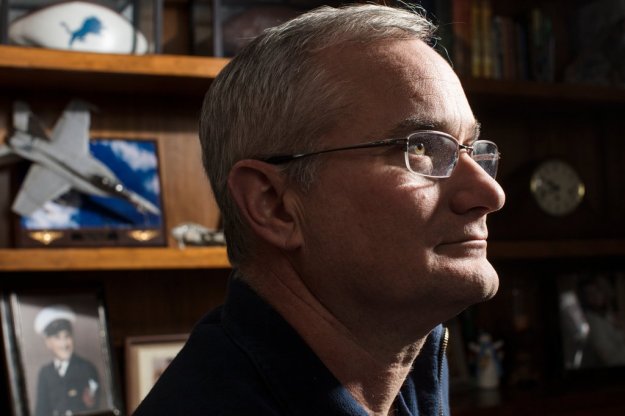 Cmdr. David Fravor and Lt. Cmdr. Jim Slaight were on a routine training mission 100 miles out into the Pacific when the radio in each of their F/A-18F Super Hornets crackled: An operations officer aboard the U.S.S. Princeton, a Navy cruiser, wanted to know if they were carrying weapons.

“Two CATM-9s,” Commander Fravor replied, referring to dummy missiles that could not be fired. He had not been expecting any hostile exchanges off the coast of San Diego that November afternoon in 2004.

Commander Fravor, in a recent interview with The New York Times, recalled what happened next. Some of it is captured in a video made public by officials with a Pentagon program that investigated U.F.O.s.

“Well, we’ve got a real-world vector for you,” the radio operator said, according to Commander Fravor. For two weeks, the operator said, the Princeton had been tracking mysterious aircraft. The objects appeared suddenly at 80,000 feet, and then hurtled toward the sea, eventually stopping at 20,000 feet and hovering. Then they either dropped out of radar range or shot straight back up.

The radio operator instructed Commander Fravor and Commander Slaight, who has given a similar account, to investigate.

The two fighter planes headed toward the objects. The Princeton alerted them as they closed in, but when they arrived at “merge plot” with the object — naval aviation parlance for being so close that the Princeton could not tell which were the objects and which were the fighter jets — neither Commander Fravor nor Commander Slaight could see anything at first. There was nothing on their radars, either.

Then, Commander Fravor looked down to the sea. It was calm that day, but the waves were breaking over something that was just below the surface. Whatever it was, it was big enough to cause the sea to churn.

Hovering 50 feet above the churn was an aircraft of some kind — whitish — that was around 40 feet long and oval in shape. The craft was jumping around erratically, staying over the wave disturbance but not moving in any specific direction, Commander Fravor said. The disturbance looked like frothy waves and foam, as if the water were boiling.

Commander Fravor began a circular descent to get a closer look, but as he got nearer the object began ascending toward him. It was almost as if it were coming to meet him halfway, he said.

Commander Fravor abandoned his slow circular descent and headed straight for the object.

But then the object peeled away. “It accelerated like nothing I’ve ever seen,” he said in the interview. He was, he said, “pretty weirded out.”

The two fighter jets then conferred with the operations officer on the Princeton and were told to head to a rendezvous point 60 miles away, called the cap point, in aviation parlance.

They were en route and closing in when the Princeton radioed again. Radar had again picked up the strange aircraft.

“Sir, you won’t believe it,” the radio operator said, “but that thing is at your cap point.”

“We were at least 40 miles away, and in less than a minute this thing was already at our cap point,” Commander Fravor, who has since retired from the Navy, said in the interview.

By the time the two fighter jets arrived at the rendezvous point, the object had disappeared.

Commander Slaight who accompanied Fravor described the object as a large bright white Tic Tac 30 to 46 feet long, with no windshield nor porthole, no wing nor empennage, and no visible engine nor exhaust plume.

Here’s an artist’s rendition of what witnesses saw, from Wikipedia:

Below is “the only official footage captured by a US N avy F/A-18 Super Hornet present at the 2004 Nimitz incident off the coast of San Diego. Like Gimbal, this footage comes with crucial chain-of-custody (CoC) documentation because it is a product of US military sensors, which confirms it is original, unaltered, and not computer generated or artificially fabricated. While there have been leaked versions on the internet, the CoC establishes the authenticity and credibility that this version is the original footage taken from one of the most advanced sensor tracking devices in use.”

It was flying faster than their Super Hornets which have a top speed of about 1,200 mph. This tic tac was estimated to be flying at speeds over Mach 5 (five times the speed of sound, over 3,800 mph) without an indication of a sonic boom, and with no exhaust plume. They (there were several of them), “would descend “very rapidly” from approximately 60,000 feet down to approximately 50 feet in a matter of seconds.” That last quote I pulled from a 2009 military report on the incident (pdf). The report was released by a CBS news affiliate in Nevada.

I imagine these are some of the technologies that Walker referenced in his letter to the Navy.

It’s not alien. Seven years after they investigated the Nimitz incident, the government said:

The U.S. government has no evidence that any life exists outside our planet, or that an extraterrestrial presence has contacted or engaged any member of the human race.” [There is] no credible information to suggest that any evidence is being hidden from the public’s eye.

The thing that draws me to all this is the technology. I don’t know how true all this is, I tried to find reputable resources, but … it’s fascinating.

2 thoughts on “Another “What Is This” Involving the USS Nimitz”