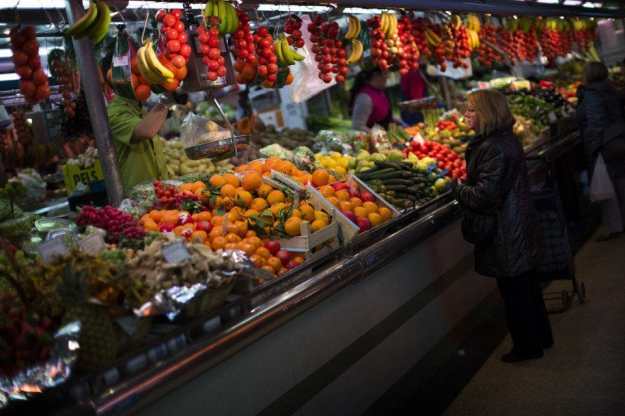 This is a nice photograph but it no longer represents a way of eating for most people. The photo accompanied the Washington Post article below, with the caption: “A woman buys produce at a market in Barcelona. Fruit and vegetables have traditionally been a large part of the diet in Mediterranean countries.” The word “traditionally” is key there.

‘The Mediterranean Diet Is Gone’: Region’s Children Are Fattest In Europe

For kids in Greece, Spain and Italy, the Mediterranean diet is dead, according to the World Health Organisation.

In Cyprus, a phenomenal 43% of boys and girls aged nine are either overweight or obese. Greece, Spain and Italy also have rates of over 40%. The Mediterranean countries which gave their name to the famous diet that is supposed to be the healthiest in the world have children with Europe’s biggest weight problem.

The data comes from the Childhood Obesity Surveillance Initiative of the WHO’s European region, which has been running since 2008 and now involves more than 40 countries that submit weight and height data for their children. The latest figures come from data collected between 2015 and 2017. “It is very high quality data.”

Mediterranean Children Stopped Eating The Mediterranean Diet, And They Now Have The Highest Obesity Rates In Europe

Surveys of adults in Spain, Italy, Greece and Cyprus, have found that younger generations tend to eat more meat and dairy and less fresh produce than older people.

“The Mediterranean diet is based on fresh, seasonal and local food,” [João Breda, program manager for nutrition, physical activity and obesity at the WHO Regional Office for Europe] told The Washington Post by email. “[Children today] eat much less fruit and vegetables, pulses and fiber-rich complex carbohydrates than their parents and grandparents.”

In some ways, this is not surprising. Most experts agree the traditional Mediterranean diet is not coming back. That diet was originally documented in the post-World War II era, when most families could not afford soda, red meat or dairy products.

Here’s my question. If people who live at ground zero for the Mediterranean Diet won’t eat food that is growing outside their window, what are the hopes that the rest of the world will eat it?

“The Mediterranean diet is based on fresh, seasonal and local food.” Where is the fresh, local food in Maine in January? Where are the olive trees in Alaska or New Hampshire? How fresh and local are are mushrooms or garlic or peas imported from China? Or Mexico? or even California? I’m not talking about the odd cabbage or tomato. I’m talking about enough fresh, local food to feed everyone everywhere. This doesn’t even take into account affordability. Fresh, local fruits and vegetables have become food for the wealthy.

I agree that the Mediterranean diet, the one that existed in the Mediterranean region prior to the turn of the last century (before 1900), was healthful. But we live in a different place, a different time. That older diet served a people who had fewer resources than we do today. It is ill-suited to our fast-paced, urban, technology-driven lifestyle. The newer Mediterranean diet? It is, as I’ve shown, a marketing gimmick promoted by industry.

People are not going to return to cooking beans from scratch, or taking several days to make a loaf of bread, or eating locally-caught, non-polluted fish (there aren’t any). People aren’t going to take a few hours to make a big pot of soup (from fresh, local ingredients, no less) when they get home from work, especially if their work was physically demanding (trash collectors, landscapers, construction workers) or involved travel (truck drivers, flight attendants). We need to provide processed and packaged food that’s healthful … canned and jarred soups, beans, fruits, sauces; frozen fruits, vegetables, and entrees; pre-made breads that are truly whole grain. We need to provide these foods without all the sugar, fat, salt, and additives that they currently contain.

If I hear someone promoting the Mediterranean Diet now I think they either don’t know what they are talking about, they’re just regurgitating something they heard, or they have a stake in the sale of a food product. The Mediterranean Diet is from a bygone era. We should let it go.