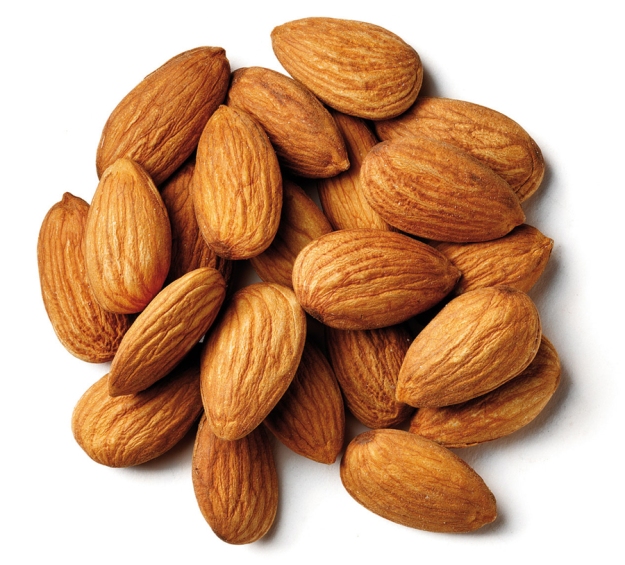 This is what a 1-ounce serving of almonds looks like (about 22 nuts).

For a while now I’ve been saying that the calories listed in food tables and data bases are really just rough guides, e.g you’ll never be able to pack a measuring cup the same way twice, especially with a whole food. Two peaches (or apples or carrots, etc.) have different sugar contents, and so, different calorie counts. (Which is why listing a food’s calories to two decimal places, as USDA’s Nutrient Database does, is pure fantasy. Although you do need benchmarks.)

That is all beside the issue of how many calories we actually absorb. Remember my write-ups about resistant starch? Some of the starch we eat (in pasta, potatoes, bananas) never gets digested and ends up feeding the bacteria in our colons instead of feeding us. So, 200 calories of pasta does not deliver 200 calories.

Here’s a little study that found quite a discrepancy between the calories listed for almonds, and the calories participants absorbed from those almonds:

The Atwater general factors (you may know them as 4 kcal/g for protein, 9 kcal/g for fat, and 4 kcal/g for carbohydrate) predicted that a 28-gram serving (about 23 almonds) would contain 170 calories. Participants in this study only absorbed 129 calories. The listed calories were overestimated by 32%.

And get this … It wasn’t just calories from almonds that were poorly predicted. Eating almonds caused an across-the-board reduction in total calories for the day. The calories, mostly fat calories, were excreted in feces:

When an 84-g serving of almonds was incorporated into the diet daily, the energy digestibility of the diet as a whole decreased by ∼5%. Therefore, for individuals with energy intakes between 2000 and 3000 kcal/d, incorporation of 84 g almonds into the diet daily in exchange for highly digestible foods would result in a reduction of available energy of 100–150 kcal/d. With a weight-reduction diet, this deficit could result in more than a pound of weight loss per month. Nuts and peanuts, being relatively energy dense and high-fat foods, may be expected to contribute to weight gain. However, both epidemiologic studies and intervention studies have suggested otherwise (17–24). These studies show that despite incorporation of nuts into the diet, there were no increases in body weight or fatness.

Can you imagine what a mess this makes of studies that try to provide isocaloric diets? Depending on the food, you could be off by 5% to 10%.

This is why it’s better to eat foods as minimally processed as possible. This is also why, probably, the men in that pistachio study could add – a pure add, not a substitution – 120 pistachios a day to their diet and not gain weight or increase their BMI or waist circumference.