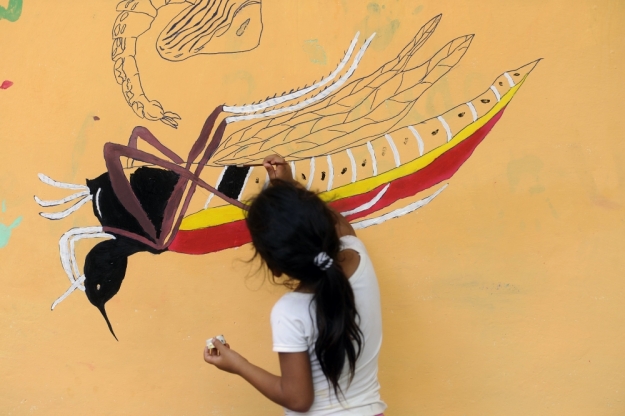 The Mouse In The Maze experiment:

Some years ago, psychologists used a maze puzzle in an intriguing experiment with college students.* A cartoon mouse was shown trapped inside a picture of a maze, and the task was to help the mouse find the way out. There were two different versions of the task. One was positive, approach-oriented; the other was negative or avoidance-oriented. In the positive condition, there was a piece of Swiss cheese lying outside the maze, in front of a mouse hole. In the negative condition, the maze was exactly the same, but instead of the Swiss cheese feast at the finish, an owl hovered above the maze, ready to swoop down and capture the mouse in its talons at any moment.

The maze takes less than two minutes to complete, and all the students who took part in the experiment solved their maze. But the contrast in the aftereffects of working on different versions of the maze was striking. When the participants later took a test of creativity, those who had helped their mouse avoid the owl turned in scores that were fifty percent lower than the scores of students who had helped their mouse find the cheese. The state of mind elicited by attending to the owl had resulted in a lingering sense of caution, avoidance, and vigilance for things going wrong. This mind-state in turn weakened creativity, closed down options, and reduced the students’ flexibility in responding to the next task.

This experiment tells us something very important: the same action (even something as slight as solving a simple maze puzzle) has different consequences depending on whether it is done to move toward something we welcome (activating the brain’s approach system) or to avoid something negative (activating the brain’s avoidance system). In the maze experiment, aversion was triggered by something as minor as the sight of a cartoon owl. It led to reductions in exploratory, creative behaviors. This is dramatic evidence that the avoidance system can narrow the focus of our lives, even when triggered by a purely symbolic threat.
– The Mindful Way Through Depression, Mark Williams, John Teasdale, Zindel Segal, Jon Kabat-Zinn, 2007

* The Effects Of Promotion And Prevention Cues On Creativity, Journal of Personal and Social Psychology, December 2001

This was just a puzzle. It wasn’t even real. Yet it had real-life effects on the students.