Another study that challenges the benefits of intermittent fasting:

Intermittent fasting (IMF) is a relatively new dietary approach to weight management, although the efficacy and adverse effects have not been full elucidated and the optimal diets for IMF are unknown.

We tested the hypothesis that a one-meal-per-day intermittent fasting with high fat (HF) or protein (HP) diets can modify energy, lipid, and glucose metabolism in normal young male Sprague–Dawley rats with diet-induced obesity or overweight.

In this diagram, when rats were allowed to eat ad libitum, when they wanted, their glucose gradually declined after a meal. When they were on a fasting diet, their glucose stayed elevated. 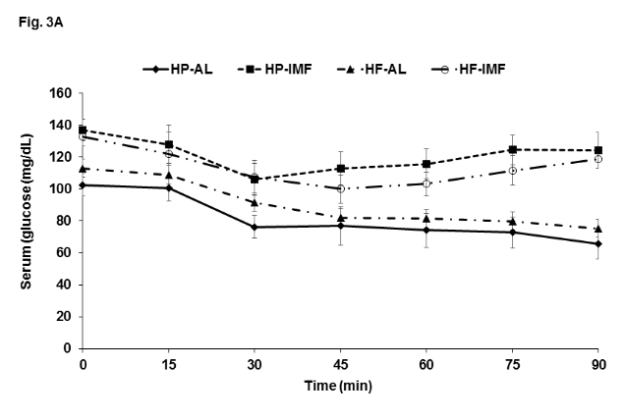 Insulin resistance accompanies type 2 diabetes, the hallmark of which is high blood glucose. Where does the glucose come from when you’re fasting? Hormones break down glucose stored in liver and muscles and release it to the bloodstream. When those stores are depleted, say, during an extended fast or a low-carb diet, the body breaks down muscle for energy – which would exacerbate sarcopenia (age-related muscle loss).

4 thoughts on “Another Study Challenges The Benefits Of Fasting”