The US government has become a big, cheap, and effective public relations operation for industry. Right?

First I discover the USDA is partnering with the dairy industry to get Americans to eat more cheese.

The New York times discovered this through documents obtained under the Freedom of Information Act. So much for transparency.

This is how the government spun it to industry:

“A definitive clinical trial represents a unique opportunity to show that moderate alcohol consumption is safe and lowers risk of common diseases,” said one slide in the scientists’ presentation at The Breakers. “That level of evidence is necessary if alcohol is to be recommended as part of a healthy diet.”

But as I said up top:

Dr. Michael Siegel, a professor of community health sciences at Boston University School of Public Health who was shown slides from the scientists’ presentation at The Breakers by The Times, said the study “is not public health research — it’s marketing.”

Why does it not count as credible research? Because:

“Volunteers … will be told to have one serving of alcohol a day.”

People do not equate one serving of alcohol with “moderate drinking.” The NIH itself defines “moderate drinking” as 2 drinks a day for men, not one. This study was designed to let alcohol off the hook. Even the length of time benefits the alcohol industry:

“The study will be too short to detect an increase in cancers linked to alcohol consumption, which may take decades to develop.”

I know what you’re thinking … “But moderate drinking has benefits.” Unfortunately, that is also industry spin:

At a cost of $100 million, the new trial aims to resolve a persistent medical conundrum. Though excessive drinking is harmful and problem drinking is on the rise in the United States, many observational studies have found that moderate drinkers outlive abstainers and have less heart disease.

There is no conundrum. Moderate drinkers do not outlive true abstainers:

The article says that this trial is so cost- and labor-intensive that it will probably be the final word on whether moderate drinking is good or bad. I predict they will find it good, because:

Most of the cost of this government trial, however, is being picked up by five of the world’s largest alcoholic beverage makers — Anheuser-Busch InBev, Heineken, Diageo, Pernod Ricard and Carlsberg.

We don’t need this trial. We already know that alcohol is not part of a healthful diet. This is a waste of $100 million and a waste of the lives of people who will die prematurely from drinking.

No Amount of Alcohol Is Safe, Medscape, April 2014

“Responsible drinking” has become a 21st-century mantra for how most people view alcohol consumption. But when it comes to cancer, no amount of alcohol is safe. That is the conclusion of the 2014 World Cancer Report (WCR), issued by the World Health Organization’s International Agency for Research on Cancer (IARC).

But surely, light drinking doesn’t cause or contribute to cancer? Apparently, it does.

1. They are dose-dependent.
2. It matters how else you live your life.

So, whether you get cancer from them depends on your total risk profile … the amount of your exposure, whether you exercise, eat a healthful diet, get adequate sleep, possess good healthcare, etc. If you engage in all 4 of the behaviors in Group 1 in the chart below, well then. That’s just an invitation. 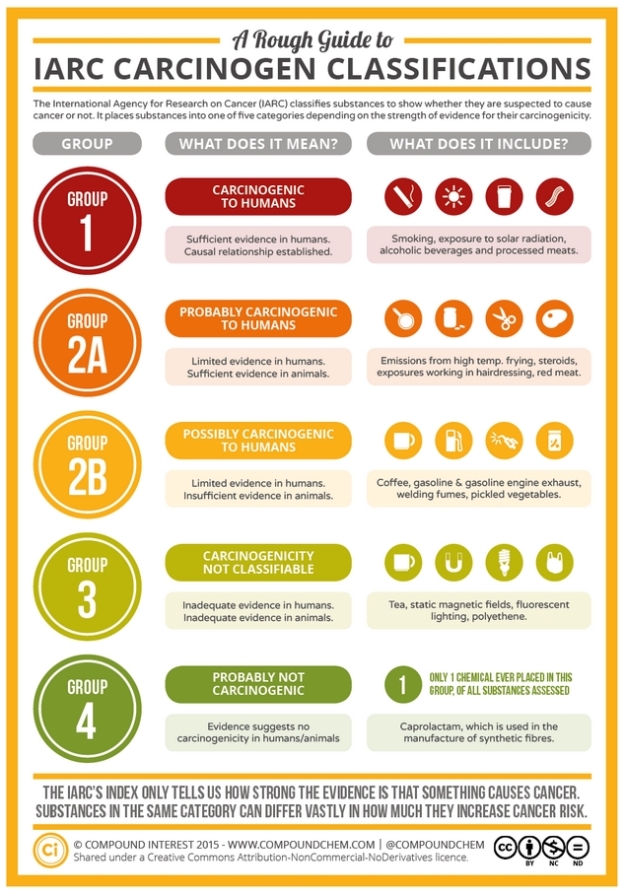 By the way, dairy food is also not part of a healthful diet.