People adapt to eating a diet high in beans, legumes, cruciferous vegetables, and other gas-producing foods. How? This recent study out of Spain shed some light:

BACKGROUND: Prebiotics have been shown to reduce abdominal symptoms in patients with functional gut disorders, despite that they are fermented by colonic bacteria and may induce gas-related symptoms.

METHODS: Healthy subjects (n = 20) were given a prebiotic (2.8 g/day HOST-G904, a galactooligosaccharide supplement) for 3 weeks. During 3-day periods immediately before, at the beginning and at the end of the administration subjects were put on a standard diet (low fibre diet supplemented with one portion of high fibre foods) and the following outcomes were measured: (i) number of daytime gas evacuations for 2 days by means of an event marker; (ii) volume of gas evacuated via a rectal tube during 4 h after a test meal; and (iii) microbiota composition by faecal Illumina MiSeq sequencing.

CONCLUSION:The availability of substrates induces an adaptation of the colonic microbiota activity in bacterial metabolism, which produces less gas and associated issues.

They used a rectal tube to measure volume of gas produced. And participants had a clicker to count gas events during the day. These were very motivated participants!

After 3 weeks of taking a supplement containing galactooligosaccharides* (GOS, a type of sugar found in foods all over the plant kingdom, not least of which are beans) these participants produced less gas and had less intestinal discomfort than when they started. The reason?

Indeed, reduced gas production was related to the proliferation of methanogens that use H2 to reduce CO2 to CH4, reducing the volume of gas by 1:5.39 Conversely, individuals with low counts of methanogens and of some speciﬁc organic acid producers exhibited a poor adaptation at the end of the administration period.

What I get from this … Either we grow a population of bacteria that don’t produce as much gas, or that produce more methane gas instead of carbon dioxide gas (methane has less volume), or our bodies become more efficient at absorbing the gas from our intestines and we exhale it off, or a combination of these.

The charts in this study are something else. Just about every measurement returned to normal and even better-than-normal after 3 weeks of GOS administration: flatulence, distension, bloating, gut comfort, mood. Here’s one on gas production: 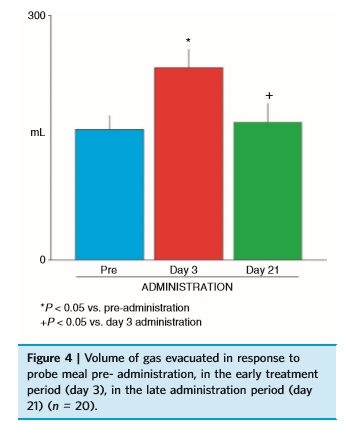 Here’s the thing… they took the supplement every day, which encouraged reconfiguring of gut flora. In the real world, people might not eat beans or other gas-producing foods every day. Some people avoid them as much as they can. So, when they do eat them, they have no adaptation to fall back on. They are like the people in this study at the beginning, always at the beginning.

* The GOS supplement used in this study came from lactose, a disaccharide made of glucose and galactose, found in milk. It has a beta, not alpha, linkage so Beano probably wouldn’t work on it. But it still fed colonic bacteria, as shown by gas production. This is a good place for me to say that you can get GOS from food, you don’t have to take a supplement. But then, biotech companies like HOST Therabiomics wouldn’t make money.

4 thoughts on “The Longer We Eat Beans, The Less Gas We Produce?”