I included a link to the actual PURE study in my prior post, the study that said carbs cause people to die sooner. I was curious if anyone would see the aspect of this study which would call into question its findings.

The PURE study analyzed data from 135,335 participants who were followed for 7.4 years. Notably, individuals from 4 low-income countries were included: Bangladesh, India, Pakistan, and Zimbabwe. Poor people in low-income countries experience poor healthcare, lack of education, poor water quality, poor living conditions, increased risks for communicable diseases … as well as poor diets. How do you know it wasn’t their poverty and not their diets that contributed to their early death? How can you say it was their high-carb diet that killed them?

Right now, South Asia is experiencing some of their worst monsoon floods. Do these populations have higher mortality because they eat rice? 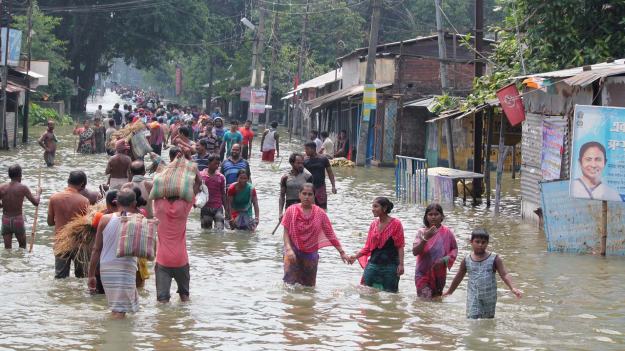 Photo from the Guardian.

Monsoons hit South Asia every year between June and September, but the 2017 monsoon season has been far worse than average,[1] bringing flooding, and associated landslides, of a scale unseen in recent years. Experts have called these the worst South Asian floods in decades, with long-term food supplies in question due to ruined farmland.[2] As of 2 September, 1,288 people have been confirmed killed, and more than 45 million affected.

A massive diet study called PURE, just published in The Lancet, seemed to receive only slightly less media attention this past week than Hurricane Harvey. And yes, in a sense, the two are connected- as I will explain. PURE stands for Prospective Urban and Rural Epidemiology. I think, however, to provide a quick understanding of what the study really means, it could have meant: Poverty Undermines Reasonable Eating.

Media coverage of PURE has ranged from mildly hyperbolic to patently absurd, including the assertion that vegetables and fruits may not be good for us this week. That is pure … nonsense.

In brief, PURE was designed to look at health outcomes associated with variations in diet in countries not well represented in prior research, and across the range from high to very low socioeconomic status. A total of 18 countries –with a particular focus on the Middle East, South America, Africa, and South Asia- and about 135,000 people participated. Dietary intake was assessed with a single food-frequency questionnaire at baseline.

There were two main findings that have spawned most of the mainstream media coverage, and social media buzz. The first was that, while health outcomes improved and mortality declined with higher intake of vegetables, fruits, and legumes- in multivariable analysis adjusting for other factors, that benefit “peaked” at about 3 servings per day. This has been widely interpreted to suggest that, at odds with conventional wisdom on the topic, more is not better with regard to vegetables, fruits, and beans.

Roughly 8% of those in the lowest intake group for vegetables, fruits, and legumes (VFL) died during the study period; whereas only 3% of those in the highest VFL intake group died- despite the fact that the highest VFL intake group was slightly older at baseline. Overall, and rather flagrantly, mortality was LOWEST in the group with the HIGHEST intake of VFL. The lowest levels of heart disease, stroke, and mortality were seen in those with the HIGHEST intake of VFL.

What, then, accounts for the strange reporting, implying that everything we’ve been told about vegetables, fruits, and beans is wrong? These benefits were “adjusted away” in multivariable models. Those people in PURE with the highest VFL intake were ALSO benefiting from less smoking, more exercise, higher education, better jobs, and quite simply- a vastly better socioeconomic existence. A multivariable model enters all of these factors to determine if a given outcome (e.g., lower death rate) can be attributed to ONE OF THEM to the exclusion of the others. The exclusive, apparent benefit of VFL intake was, predictably, reduced when the linked benefits of better education, better job, and better life were included in the assessment.

What explains away the apparent paradox is that vegetable, fruit, and legume intake was apparently highest in the most affluent, most highly educated study participants- while “total carbohydrate” as a percent of calories was highest in the poorest, least educated, most disadvantaged. In those cases, carbohydrate was not a variety of highly nutritious plant foods; it was almost certainly something like white rice, and little else.

The conclusion, and attendant headlines, for PURE might have been: “very poor people with barely anything to eat get sick and die more often than affluent people with access to both ample diets, and hospitals.” One certainly understands why the media did NOT choose that. It is, however, true- and entirely consistent with the data.

These papers were released concurrently with the devastation in Houston, and the Gulf Coast, of Hurricane Harvey- the greatest rain event in the recorded history of the continental United States. The unprecedented rainfall is related to climate change, which in turn is monumentally influenced by global dietary choices. How appalling that the PURE findings were not merely misrepresented to the public in irresponsible reporting pertaining to human health effects, but in reporting that ignored entirely the implications of that bad dietary advice for the fate of the climate, and planet.

This week as last, whole vegetables and fruits are reliably good for you, and for the most part, the more the better. The benefits of that produce, however, do not preclude the benefits of an education, a job, and medical care- nor vice versa.

This week as last, most of the hyperbolic headlines about diet, telling us everything we thought we knew before was wrong- are pure nonsense.

PURE found that the lowest levels of heart disease, stroke, and mortality were seen in those with the highest intake of vegetables, fruits, and beans. All of those are high-carb.