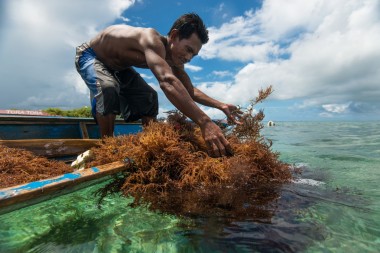 Carrageenan is extracted from a type of seaweed called Irish moss, here being harvested in the Philippines.

That food additive is carrageenan. I saw this on Reijo Laatikainen’s Twitter feed:

A Randomized Trial Of The Effects Of The No-Carrageenan Diet On Ulcerative Colitis Disease Activity, Nutrition and Healthy Aging, Online 31 March 2017

BACKGROUND: Carrageenan is a very common food additive in Western diets, but predictably causes inflammation in thousands of cell-based and animal experiments.

OBJECTIVE: To assess the impact of carrageenan exposure on the interval to relapse in patients with ulcerative colitis in remission.

METHODS: A randomized, double-blind, placebo-controlled, multicenter, clinical trial was conducted to assess if patients with ulcerative colitis in remission would have a longer interval to relapse if they followed a diet with no carrageenan. All participants were instructed in the no-carrageenan diet and were randomized to either placebo capsules or carrageenan-containing capsules. The carrageenan in the capsules was less than the average daily carrageenan intake from the diet.

RESULTS: Twelve patients completed study questionnaires. Three patients who received carrageenan-containing capsules relapsed, and none of the patients who received placebo-containing capsules relapsed. Laboratory tests showed increases in Interleukin-6 and fecal calprotectin between the beginning and the end of study participation in the carrageenan-exposed group, but not in the placebo-group.

Carrageenan is extracted from seaweed and is used as a thickener. It’s in lots of foods: soy milk, yogurt, sauces, and vegan “meats” and “cheeses” for texture. People think because it’s natural that it’s benign. It isn’t. This study just looked at colitis (see below) but carrageenan is thought to contribute to many irritable bowel problems.

Ulcerative colitis is an inflammatory bowel disease (IBD) that causes long-lasting inflammation and ulcers (sores) in your digestive tract. Ulcerative colitis affects the innermost lining of your large intestine (colon) and rectum. Symptoms usually develop over time, rather than suddenly.