I just read this article. It mirrored the point in my last post about class:

The Gulf Between the Donor Class and the Working Class, The Cook Report, 1 April 2016

Cook is speaking about both Republicans and Democrats here. The rise of Trump on the right and Sanders on the left can be explained by workers who have been left behind and no longer wish to support the establishment. Cook says that America’s elite “… just don’t get it. They don’t un­der­stand the im­pact for blue-col­lar wage work­ers in this coun­try over a 20-year basis, and you’re see­ing this now all play out in this gen­er­al elec­tion.”

Marion Nestle is part of an elite class. She is well-educated with, to use her words, “a privileged position as a tenured, full-salaried faculty member at NYU.” NYU is New York University, one of the most prestigious universities in the country.

Nestle and other members of her class appear to be out of touch with how most Americans are eating, or they just don’t care. Nestle says:

“All of these companies sell highly processed foods in an era when the public is demanding – and voting with their dollars – for fresh, natural, organic, locally grown and sustainably produced ingredients.”

The public, the majority of Americans, are not buying “fresh, natural, organic, locally grown and sustainably produced ingredients.” Only a sliver are because most don’t have access. The word “access” includes all types of obstacles, not just financial.

Here’s a recent chart by the USDA showing the demand for vegetables is not increasing, as Nestle suggests, but decreasing. The report also shows fruit consumption is down. 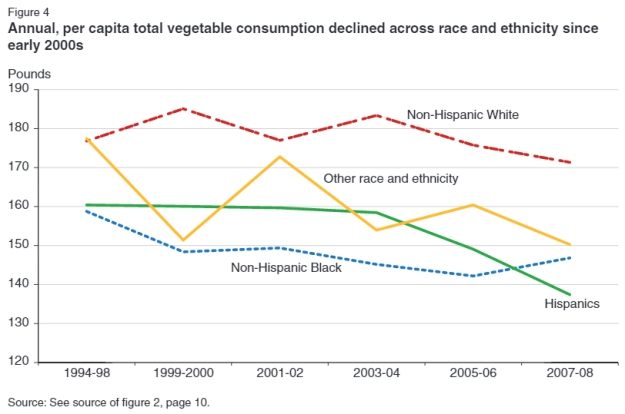 Nestle is speaking to her fan base in her article, No Amount Of ‘Free From’ Labelling Will Make Processed Food Good For You. She is promoting her brand, encouraging book sales and speaking engagements, keeping herself visible. Maybe it’s not that she’s out of touch, maybe it’s more that she wants to stay in touch with members of a class who can and do exchange their dollars for “fresh, natural, organic, locally grown and sustainably produced ingredients,” and for her brand’s products.

Back in 2008, Michelle Obama notably said:

“Everything that’s in a bottle or a package is like poison in a way that most people don’t even know. … Now we’re keeping, like, a bowl of fresh fruit in the house. … In my household, over the last year we have just shifted to organic.”

So, Americans who are eating food that comes in a bottle or package are eating poison? And to not eat poison you have to eat fresh, organic food? As she does?

Dr. Weil says we should not buy the following foods unless they are organic: apples, strawberries, grapes, celery, peaches, spinach, peppers, nectarines, cucumbers, cherry tomatoes, snap peas, potatoes, blueberries. He’s not saying we should eat them less, he’s saying we should not eat them at all. Those are strong words. Who is he speaking to? USDA says that only 2% of farmland is organic.

I keep saying this and I will, even though I feel like my words dissolve into the ether. … As long as people like Nestle and Obama and Weil promote the high-end “organic” alternative, the food the rest of us eat won’t change that much. If the elite didn’t have the organic alternative, there would be improvement in food overnight, improvement in everyone’s food! It angers me that even when manufactureres do make changes – take BPA out of can linings, reduce salt and sugar – the elite poo-poo it.

What the people in my title are advancing is not public health. It’s every man for himself.