In my last post, I gave evidence that glyphosate, the active ingredient in Monsanto’s herbicide Roundup, was an endocrine disruptor (ED). The Roundup formulation is, in fact, a stronger ED than glyphosate alone, owing to “inert” ingredients that enhance glyphosate uptake. The studies I cited also showed that glyphosate and Roundup disrupt metabolism at levels below that now allowed in food and water.

Here I show that instead of using less glyphosate and Roundup, in light of its risks to public health, farmers are using more.

Trends In Glyphosate Herbicide Use In The United States And Globally, Environmental Sciences Europe, 2 February 2016

Since the mid-1990s, significant changes have occurred in when and how glyphosate herbicides are applied, and there has been a dramatic increase in the total volume applied.

Those are sobering statistics. Why are we using more and not less? One reason, GMO crops are becoming increasingly resistant to glyphosate. Another reason, farmers are finding off-market uses for the herbicide, for example “desiccation”:

Why Is Glyphosate Sprayed on Crops Right Before Harvest?, EcoWatch, 5 March 2016

Farmers there [Scotland 1980s where the practice originated] often had trouble getting wheat and barley to dry evenly so they can start harvesting. So they came up with the idea to kill the crop (with glyphosate) one to two weeks before harvest to accelerate the drying down of the grain,” he [Charles Benbrook PhD, author of that second study above] said.

Joel Ransom, an agronomist at North Dakota State University said, “It does help hasten dry down and controls grain weeds and other material that slows down the threshing practice,” he said. “It has an important role in areas where it’s wet.” … Ransom says the practice has increased in North Dakota, which is the leading wheat-producing state in the U.S., over the past 15 years due to wetter weather.

Gerald Wiebe, a farmer and agricultural consultant said, “I would estimate that 90 to 95 percent of wheat acres in Manitoba are sprayed pre-harvest with glyphosate. … Consumers don’t realize when they buy wheat products like flour, cookies and bread they are getting glyphosate residues in those products,” he said. “It’s barbaric to put glyphosate in food a few days before you harvest it.”

Wiebe believes the use of glyphosate on wheat may be connected to the rise in celiac disease. “We’ve seen an explosion of gluten intolerance,” he said. “What’s really going on?”

Tom Ehrhardt, co-owner of Minnesota-based Albert Lea Seeds said, “Can you imagine the public’s response if they knew that glyphosate is being sprayed on the oats in their Cheerios only weeks before it is manufactured?”

Benbrook: “It may be 2% of agriculture use, but well over 50% of dietary exposure. … I don’t understand why Monsanto and the food industry don’t voluntarily end this practice. They know it contributes to high dietary exposure (of glyphosate).”

You understand why Monsanto and the food industry don’t end this practice, don’t you. It’s profitable. In the hierarchy of priorities, public health falls well beneath profit. If anyone would end this practice, it would be the EPA. Unfortuately, EPA just raised allowable amounts of glyphosate in crops.

Monsanto, in fact, uses desiccation of crops as a selling feature of glyphosate and Roundup. From page 27 of their document:

Monsanto, Review Of The Benefits Of Glyphosate Per Market Use, February 2010

Here’s a photograph from their document:

The photograph shows complete foliar desiccation of grain maize on the right side 14 days after application of glyphosate (Roundup Bioaktiv) … with the untreated visible on the left-hand side. 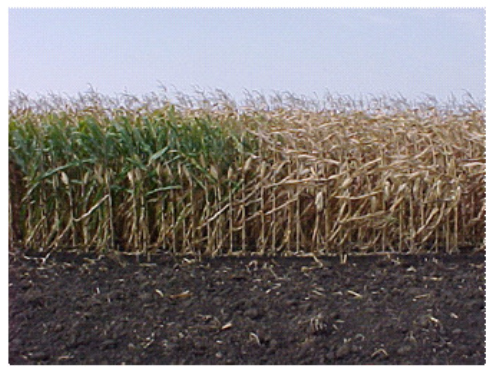 This sentence is chilling:

How much of this herbicide gets washed away or metabolized by the plant (especially given the plant is being killed) in the 14 days prior to harvest? Benbrook’s statement about crop desication seems credible: “It may be 2% of agriculture use, but well over 50% of dietary exposure.”