What have we done to these animals? For what?

Look How Much Bigger Thanksgiving Turkeys Are Today Than in the 1930s, Mother Jones, 24 November 2014 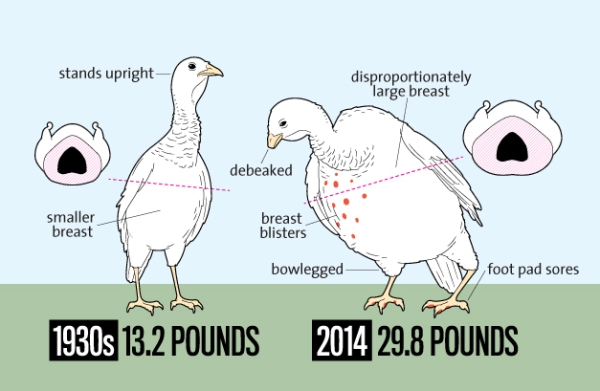 [In the 1950s] turkey farmers began to selectively breed birds for both size and speed of growth — especially in the breast, the most popular cut among American diners. The birds grew so fast that their frames could not support their weight, and as a result, many turkeys were bowlegged and could no longer stand upright. The male turkeys, or toms, got so big—as heavy as 50 pounds — that they could no longer manage to transfer semen to hens. Today, reproduction happens almost exclusively through artificial insemination.

At around the same time, producers also began moving their operations indoors, where they could fit more birds and ensure that they developed uniformly, so turkeys’ feeding and care did not have to be individualized. In these close quarters, birds began to develop infections, like sores on their breasts and foot pads. To prevent these problems, and also to encourage growth, producers added low doses of antibiotics to the birds’ feed. Also because of space limitations, birds became aggressive and often resorted to cannibalism. In response, hatcheries began trimming birds’ beaks—known as debeaking — when they were a few days old.

These turkeys don’t sound appetizing, do they. I wonder if, after 50 years of eating big, fast-growing, deformed GMO salmon, we will continue to find them appetizing. Maybe we will long for the day when seasonal, wild-caught salmon reigned.