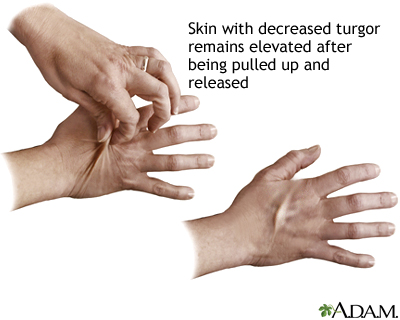 Skin that is pulled up and does not immediately return to its original state is a sign of dehydration. If the person is older, skin on the collarbone is a better indicator.

Another thing we shouldn’t depend on? The color of our urine. As we age, our ability to concentrate urine declines, which means our pee may be more dilute or lighter in color even when we’re not taking in adequate fluids.1,2 Of course, when you’re in the throes of dehydration, urine can be quite dark.

I’ve been reading about fluid balance as we age, and the issue of age-related dehydration. Some things I learned …

Thirst and fluid intake are distinct but, as you can imagine, related. Beginning in middle age, and becoming more acute in the 60s and beyond, we experience reduced thirst and reduced fluid intake – that’s involuntary fluid intake, or drinking without thinking about it. That’s the intake side of the equation. We also experience increased water loss. We lose more water through our skin (“insensibly” without feeling it), through breathing, and through urinating (more dilute urine) than we did when we were younger.2 All of this sets us up for dehydration as we age.

The moral of this story? As we age, we need to drink more than we did when we were young to maintain water balance.

… begins by listing symptoms associated with not getting enough fluid:

The manifestations of thirst have been characterized as a combination of sensations that increase with dehydration and decrease with rehydration (restoration of fluid balance), including a dry, scratchy mouth and throat, chapped and dry lips, light-headedness, dizziness, tiredness, irritability, headache, loss of appetite, and feeling of an “empty stomach.”

Other symptoms of mild dehydration include:

That’s a lot of symptoms, isn’t it. Dehydration is not good.

That our thirst sensation declines has been documented. Why it declines is less understood. Complicating that understanding is that the maintenance of water balance is governed by several sensing mechanisms and several bodily functions involving several organs … the brain, the kidney, the endocrine system (e.g. we have a salt appetite that is activated by hormones, affecting both volume and osmolality of compartments), the skin, and others. Humans have evolved a complex system to prevent dehydration.

Here’s one mechanism that I found odd. In humans, the act of swallowing helps to regulate our fluid intake.3 If we haven’t swallowed enough, we’ll want more fluid, even if fluid was replenished by tube-feeding. And when we’ve swallowed enough, we don’t want to drink any more, even if the fluid we just drank was removed! This is from the 2001 Kenney paper up top:

Six subjects [were dehydrated] by light exercise in a warm environment on three different occasions. Rehydration involved one of three treatments. The first involved 75 min of ad libitum drinking. The second involved infusion of an identical volume directly into the stomach via a nasogastric (NG) tube, plus ad libitum drinking after 25 min. The third involved ad libitum drinking again, but with immediate withdrawal of the fluid from the stomach. Reflex inhibition of thirst began within 5 min of rehydration in groups 1 and 3, but not in the infusion group. Ad libitum drinking without absorption (withdrawn with NG tube) resulted in only 15% more fluid intake than the ad libitum condition. These data demonstrate a clear role of esophageal metering in determining fluid intake during dipsogenic stimuli in humans.

Here’s some evidence for decreased thirst as we age, from Kenney and Chiu:

After a 24-hour period of restricted water intake that caused an equal weight loss in older and younger subjects, a group of healthy men 67–75 yr old were less thirsty and replaced less of the fluid deficit over the next 2 hours than did young controls.

In another study where a saline solution was infused, older men felt less thirsty and drank less than younger men.

During a 2-hour recovery period after each exercise session, young men replaced, on average, 80% of lost fluid drinking a carbohydrate-electrolyte drink, compared with 34% fractional fluid recovery in the 70-yr-old group.

When challenged by fluid deprivation, a hyperosmotic stimulus, hypovolemia, or exercise in a warm environment, older adults exhibit a decreased thirst sensation and reduced fluid intake. Acutely, fluid restoration is eventually effective, but restoration of fluid balance is slower. Longer term fluid intake (i.e., days to weeks) in response to repeated dehydrating stimuli also appears to be reduced, which may contribute to a relative inability to expand plasma volume. When age differences are noted in the physiological control systems associated with thirst and satiety, hypovolemia seems to be more closely associated with a decreased thirst sensation. Available evidence suggests that older men and women have a higher osmotic operating point for thirst sensation under normal daily conditions, and a diminished sensitivity to thirst and satiety reflexes arising from unloading (hypovolemia) and loading (hypervolemia) of baroreceptors, respectively. 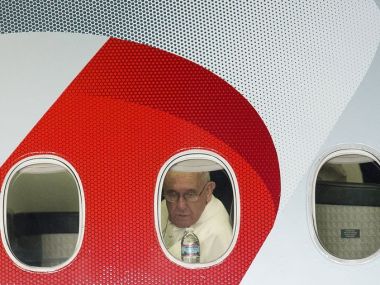 Driving this point home … It takes less water to maintain water balance when we’re young than when we’re older. And we shouldn’t be relying on our thirst. Go back and look at the symptoms at the top of this page.

How much should older people be drinking? The Kenney paper cited a study which gave a normal range of beverage intake for 65 to 79 year olds, not counting fluid from food, as 1.6 to 2.4 liters a day. And…

These 2 liters a day are what the adults drank, not what was optimum, although the two may not differ. Older people should probably be drinking about 2 liters or 8 and a half cups of non-alcoholic fluid a day.

By the way, something I learned a while ago … water is produced in our cells when we burn carbohydrates, in the making of ATP. It is that water which helps to keep hibernating animals hydrated!

________
1 Electrolytes in the Aging, Advances in Chronic Kidney Disease, July 2010.
2 Increased Insensible Water Loss Contributes To Aging Related Dehydration, PLoS One, May 201. (We become less sensitive to antidiuretic hormone (ADH) or vasopressin. ADH’s job is to keep water in the body. Alcohol and caffeine both inhibit ADH causing us to pee more and lose more fluid.)
3 Regulation Of Fluid Intake In Dehydrated Humans: Role Of Oropharyngeal Stimulation, American Journal of Physiology, June 1997

17 thoughts on “Don’t Depend On Your Thirst Sensation To Guide Your Fluid Intake, Especially If You Are Older”