Conclusions: In a representative sample of US adults, access to the natural environment attenuated [lessened] the likelihood of reporting insufficient sleep, particularly among men.

Press Release: U Of I Study: Men, People Over 65 Sleep Better When They Have Access To Nature, University of Illinois, 24 August 2015

So, the more access (not necessarily exposure) a man (or either gender over 65) had to natural surroundings the better they slept, rather, the better they reported sleeping. They didn’t actually ask all 255,171 respondents if they visited a park or took a nature walk. They just compared their reported quality of sleep with their nearness to “natural amenities,” a park, a sandy beach, or an ocean view.

Before I go any further I want to emphasize that they did not find a statistically significant benefit for women under 65. That’s a huge group. I just looked at various news stories for this study and saw photos of young women enjoying green space and young women sleeping peacefully. I guess photos of young, pretty women sell a story regardless of whether they’re a fair representation of the study’s findings. 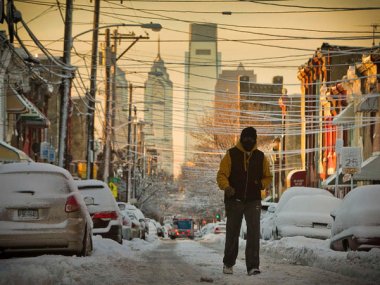 “A North Philly resident makes his way on foot through the snow-covered streets.” 1 March 2015, Philly.com Taking a walk along a sandy beach or a hike through a nature trail isn’t always an option, unless snow is considered a natural amenity.

Do you think that people who have access to parks, sandy beaches, nature trails, and other natural amenities could be of a different demographic than people who don’t? I would feel more comfortable drawing conclusions from this study if socioeconomic differences were accounted for. There are areas in Philadelphia that I’m familiar with that don’t have much green space; they do have higher crime rates, gangs, higher rates of drug use and drug addiction, poor access to healthy food, less education and the attendant unemployment, part-time work, or shift work, more air pollution, more noise pollution, more exposure to artificial light at night, more single-parent households, less access to quality health care.

Is it really the lack of green space causing people to not have a good night’s sleep? Or is it that nearness to natural amenities is a marker for a higher socioeconomic class? A higher standard of living? A better quality of life?