This randomized, placebo-controlled, double-blind study was designed to investigate the efficacy and tolerability of pumpkin seed oil (PSO) for treatment of hair growth in male patients with mild to moderate androgenetic alopecia (AGA).

76 male patients with AGA received 400 mg of PSO per day or a placebo for 24 weeks. Change over time in scalp hair growth was evaluated by four outcomes: assessment of standardized clinical photographs by a blinded investigator; patient self-assessment scores; scalp hair thickness; and scalp hair counts.

After 24 weeks of treatment:

The study shows that pumpkin seed oil could improve androgenetic alopecia (AGA, male pattern baldness) and that it should be considered a potential alternative treatment.

Here are before and after photographs of a few men in the study. The effect wasn’t profound, but it was evident. This is after 6 months of pumpkin seed oil, 400 mg daily: 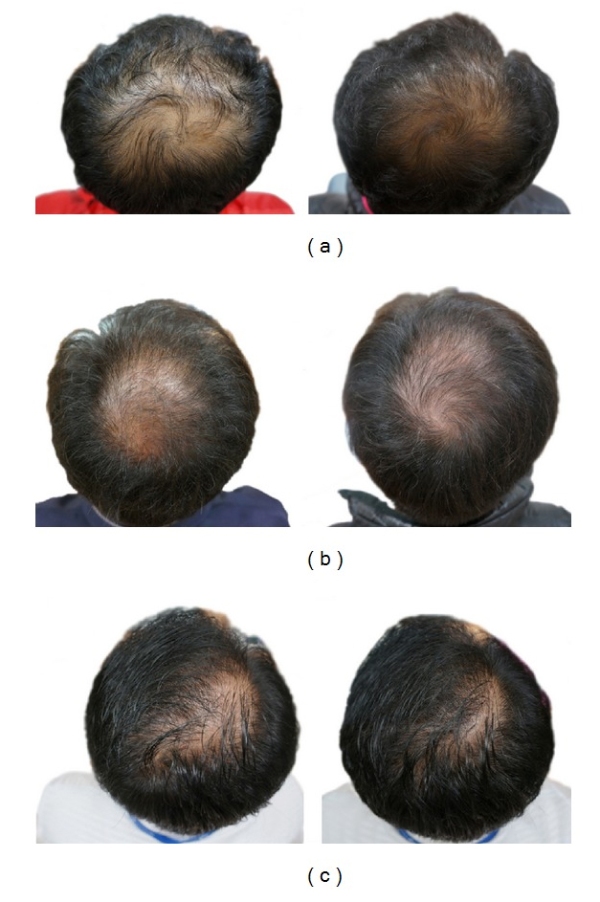 Testosterone converts to DHT with the aid of the enzyme Type II 5-alpha reductase, which is held in a hair follicle’s oil glands. Scientists now believe that it’s not the amount of circulating testosterone that’s the problem but the level of DHT binding to receptors in scalp follicles. DHT shrinks hair follicles, making it impossible for healthy hair to survive.

Other foods that inhibit 5-alpha reductase are flax seeds and green tea.