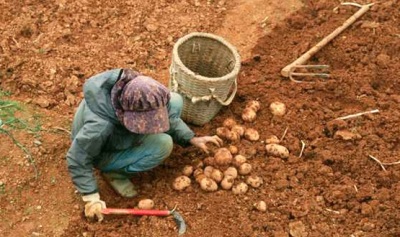 The diet that set the stage for people in Okinawa living into their 100s, experiencing some of the healthiest longevity in recorded history, was one of either a poor agricultural society or one bearing the hardships of war.

As to the former point:

[Okinawans’] energy deficits are supported by historical reports of periodic crop failures that occurred in Okinawa in the early 20th century and a long history of marginal food supply.1

As to the latter point:

Before the 1960s, their diet was lower in calories and lower in the more expensive calories of meat, fish, dairy, and fat than the diet of today’s Okinawan population, but not by choice. In recent years the number of centenarians in Okinawa has declined (“the Okinawan mortality advantage has all but disappeared except in older cohorts (aged 65-plus)”1), as their diet has become more Westernized, more flush with meat, fat, and dairy food.2

Here is some data on the diets of Okinawans in 1949 (when those in their 90s today would have been in their 30s), with a comparison to mainland Japan where average and maximum lifespans were lower: 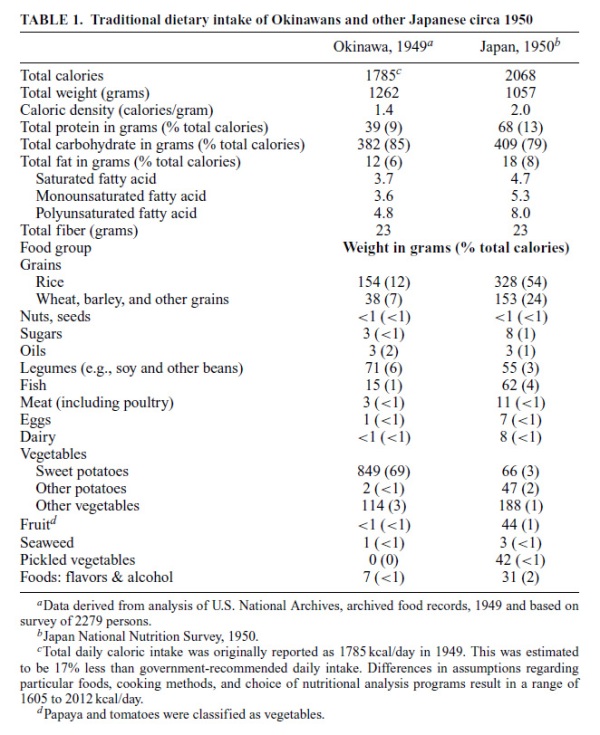 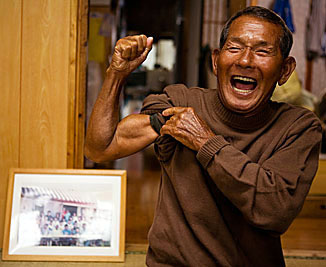 The foods they were eating? Mostly sweet potatoes (4 to 5 cups a day), brown rice (about a cup a day), vegetables, and legumes (mostly soy which was their principle protein source). About those sweet potatoes:

The Okinawan sweet potato, with a caloric density of 1.0 kcal/gram [rice is more caloric at 1.5 kcal/gram], has been the main carbohydrate of the Okinawan diet from the 1600s until approximately 1960, accounting for more than 50% of calories.1

The foods they weren’t eating? Not much fruit. Not many nuts or seeds. Not much oil – at 2% of calories, it works out to less than a teaspoon of oil a day. And hardly any animal foods. Fish, at 1% of total calories was about one 3-ounce serving a week. All other meat, including poultry, worked out to one small serving a month. One egg every two months.

The foods they ate had a low caloric density but a high nutrient density. That kept them lean but fit. 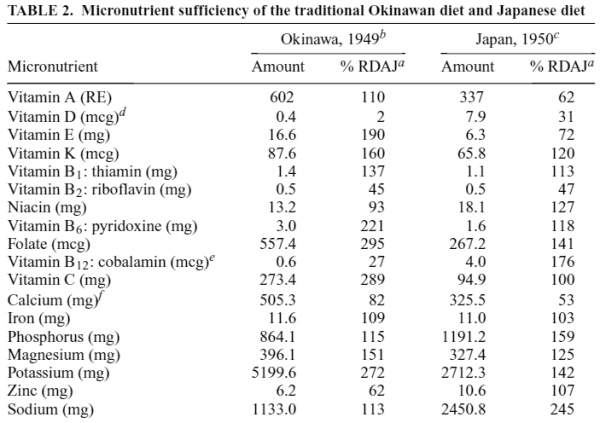 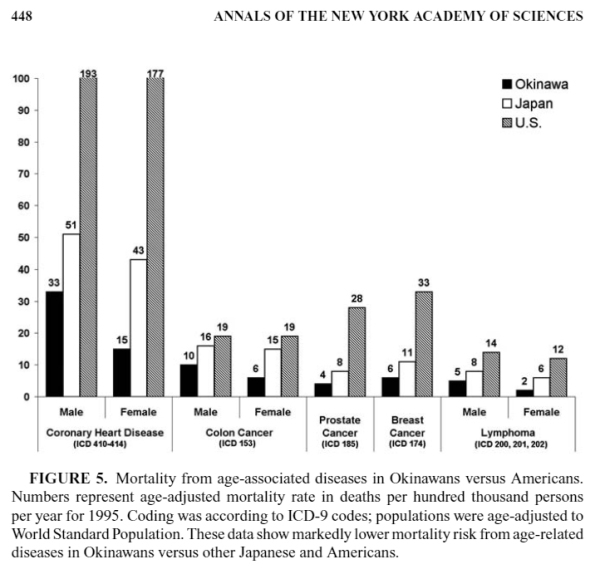 Their diet began to change in the 1960s, so did their weight:

The BMI of adult Okinawans remained stable at a very lean level of approximately 21 kg/m2 until the 1960s. During the 1960s the Okinawan adult BMI began to rise. This was coincident with a shift to consistently positive energy balance.

Was the Okinawans’ traditional diet a primary factor in their longevity? I think so. One thing you can say for certain, it didn’t impede long life.

1Caloric Restriction, The Traditional Okinawan Diet, And Healthy Aging: The Diet Of The World’s Longest-Lived People And Its Potential Impact On Morbidity And Life Span, Annals of the New York Academy of Sciences, 2007
2 Nutrition For The Japanese Elderly, Shibata et al., Nutrition and Health, 1992
3From Wilcox et al.: “Okinawa is located at a subtropical (26.4◦) latitude and subjects would likely have manufactured enough in vivo vitamin D from sunlight to meet RDAJ.”
Photos of Okinawans from National Geographic. The video stated that Okinawa now has the highest rate of obesity in all of Japan.