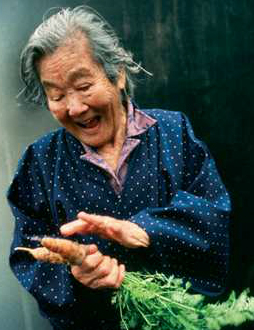 This photo of a centenarian from Okinawa (she’s not the woman in this study) is a still image from National Geographic’s video Secrets of Living Longer. It a great little video, very uplifting!

This is a fascinating discussion about the physical state of a 100-year-old woman from Okinawa at her death:

Consistent with the compression-of-morbidity hypothesis, several studies have reported that a significant proportion of centenarians delay or escape age-related diseases. Of those who live with such diseases for a long time, many appear to do so with better functional status than do younger persons who do not achieve extreme old age. The authors describe the first autopsy in an Okinawan-Japanese centenarian who escaped many age-related illnesses and delayed frailty toward the end of her very long life.

“Compression of morbidity” refers to the compressing or shortening of time between illness and death. If there is a lot of compression, someone remains relatively healthy until a brief time before they die (green line in graph). If there is not much compression, someone becomes more sick and frail as they age (blue lines in graph). If you want a long healthy life, you need to postpone the onset of chronic disease (like diabetes, heart disease, cancer), as this woman did.

Here’s some background on this woman:

A 100-year-old woman came to Chubu Hospital in Okinawa, Japan because of shortness of breath. The patient had been healthy until very late in life, when, in short succession, she suffered a T7 compression fracture at age 92 years, two hip fractures at ages 97 and 98 years that were treated with prosthetic replacements, and bronchitis requiring 6 weeks’ hospitalization at age 99 years. She had no history of congestive heart failure, myocardial infarction, angina, stroke, hypertension, diabetes, tuberculosis, other pulmonary disease, or cancer. Cognitive impairment was first noted by her daughter and her physician at age 98 years. She did not take any medications. She lived her entire life in Okinawa, where she worked for many years as a farmer. As a young woman, she smoked 2 to 3 cigarettes per day, and she had no history of alcohol use. She used a wheelchair after the second hip fracture and depended on her family for assistance with all activities of daily living.

Note that the cognitive impairment did not occur until after her two major hip replacement surgeries. Surgery and exposure to anesthesia is known to disrupt brain function, especially in the elderly. I’m curious about that “2 to 3 cigarettes per day.” I wonder if they meant 2 to 3 packs, because you can be exposed to more background or second-hand smoke than just a couple cigarettes would give.

It looks like the cause of death, in the end, was pneumonia:

The patient was admitted to the hospital and received intravenous fluids and oxygen. … After 3 weeks in the hospital on antibiotic therapy, the patient became depressed, expressed thoughts of dying, and refused to eat. …The patient’s family requested that no aggressive measures be taken to prolong the patient’s life and that all phlebotomy stop. … Nearly 6 weeks after admission, the patient suddenly experienced loose bloody stools, her oxygen saturation rate quickly decreased to 60%, and she died.

And here’s a bit about her health at death:

That the patient’s coronary vessels were free of atherosclerotic narrowing and calcification is remarkable given autopsy reports on white centenarians (those aged 100 to 103 years) and other exceptional survivors (those aged 90 to 103 years), which show coronary vessel narrowing in 66% of patients and coronary calcification in 84% to 97% of patients (5,6). This finding is consistent with the low incidence of and mortality from cardiovascular disease in Okinawa compared with Japan overall and the United States (1,2,8).

The patient’s kidneys, like the heart and stomach, appeared remarkably healthy. The usual age-associated changes in kidney structure include loss of 30%–50% of cortical glomeruli by the seventh decade and sclerosis of up to 30% of the remaining glomeruli (13). In this case, 90% of the glomeruli had no sclerosis and there appeared to be no loss in total number.

Her heart, digestion, and kidneys were all healthy and could have provided additional years of high-quality life. Her weaknesses were her bones and her lungs. The authors suggest that her lung ailments developed through exposure to various environmental pollutants, e.g cigarette smoke and farming chemicals. They didn’t mention the extraordinary levels of toxic waste strewn around the island from US military bases. Indeed, Okinawa is nicknamed “the junk heap of the Pacific.” Three of its rivers rank among the five most polluted rivers in Japan.

With all that pollution, it’s notable she never had any cancer. In fact, Okinawans as a population have cancer rates orders of magnitude lower than ours, especially cancers of the breast and prostate. Although those rates have been creeping up as their diet becomes more Westernized. The more I read, the more I am convinced that diet plays a key role in cancer, both development and progression, as well as other chronic diseases.

What did this woman eat? This table provides some clues (from Traditional Okinawan Diet: Sweet Potatoes):

She would have been in her mid 40s at the time of this data, so during mid-life at least, she probably got most of her calories from carbohydrates (carbs supplied 85% of calories here) especially sweet potatoes with some rice, beans, and vegetables. Hers was likely a very low-fat (6% of calories), low-protein, high-carbohydrate diet, the kind of starch-based diet that Dr. McDougall might rubber-stamp.

The authors of this autopsy study said there are three variables that predict longevity, “genetic predisposition, lifestyle choices, and chance.” Two of those, genes and chance, are out of our control. Lifestyle isn’t. And what we eat is a big chunk of “lifestyle.”

It is not inevitable that we will become increasingly sick and frail as we age.

2 thoughts on “First Autopsy Study Of An Okinawan Centenarian: Absence of Many Age-Related Diseases”