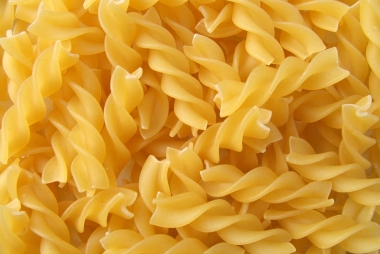 The answer to the question in my title is no, excess carbohydrate doesn’t easily convert to body fat unless you’re eating a high-fat diet at the same time. That’s my understanding.

My post from last March, Excess Carbohydrate Does Not Turn To Body Fat has been getting attention, so I clicked around to see if anything new has changed the thinking on it. I didn’t see anything but I did stumble upon this review:

Utilization Of Dietary Glucose In The Metabolic Syndrome, Nutrition and Metabolism, October 2011

The media, and even some doctors and diet book authors, advance the notion that eating sugar makes us fat. Studies don’t bear this out. As long as the body is not consuming a lot of fat, excess carbohydrate is either metabolized (and given off as body heat) or stored as glycogen. I’ve cited numerous studies over the years that support this, including analyses of large populations (e.g Cubans, and Japanese/Okinawans).

But Americans eat a lot of fat, even when they think they aren’t.  Studies that purport to show risks from “low-fat” diets have their subjects eating 30% fat or more, which is not low-fat (something less than 15% is low fat). Against this high-fat backdrop, excess carbohydrate can be problematic (I’ve written about this in my “meat & potatoes” posts).

This review by Marià Alemany summarizes the mechanisms by which consuming excess carbohydrate in conjunction with a high-fat diet can lead to insulin resistance, obesity, diabetes, and the metabolic syndrome. It is utterly full of kernels and one reason I’m posting it is as a reference. I mean, look at his list of citations!

We are adapted to carbohydrate-rich diets similar to those of our ancestors.

Is there still debate about that?

The absence of dietary glucose is a physiological signal in itself, a correlate of starvation, and elicits the mobilization of lipid stores to cover the body energy needs. Thus, high lipid availability is construed as a sham “starvation-like condition”, which prevents the massive oxidation of glucose.

That right there (above) is why eating a high-fat, low-carb diet causes you to lose weight and burn excess body fat. No argument from me there. But you mortgage your health by losing weight this way. It’s not a healthy long-term solution.

Dietary lipids favor their metabolic processing, saving glucose, which additionally spares amino acids. The glucose excess elicits hyperinsulinemia, which may derive, in the end, into insulin resistance.
…
Insulin resistance is closely related to excess fatty acid availability, and facilitates the deposition of fat in adipose and other tissues.

He couldn’t have said that any simpler. No, wait, I think Dr. McDougall said it simpler, “The fat you eat is the fat you wear.” As I’ve said for years … eating fat contributes to insulin resistance, which means glucose can’t enter cells, so it builds up in the blood, causing the pancreas to secrete even more insulin to compensate, to try to push glucose into cells that don’t want it. And insulin, being an anabolic hormone, causes you to put on fat.

In humans there is little lipogenesis from glucose under normal conditions.
…
The physiologically established mechanism for excess nutrient energy removal is thermogenesis.

And that right there (above) is why eating too much sugar won’t cause you to get fat. When you eat too much carbohydrate, especially in the absence of large amounts of dietary fat, your body burns or oxidizes it. Your body gets hot (thermogenesis).

Thus, a maintained excess of energy in the diet may result in difficulties in the disposal of glucose, eliciting inflammation and the development of the metabolic syndrome.

This last quote is a repeat of the bits above but I thought it tied everything up and brought it to an understandable and sober conclusion.

One thing that stood out for me was … during starvation (which a low-carb, high-fat diet mimics) the body preserves or rations glucose for tissues that absolutely need it, that can’t make due with ketones (a product of fatty acid oxidation). Nervous tissue (the brian) and red blood cells depend almost exclusively on glucose for energy so the body closes the door to glucose in other cells, like muscle. It closes the door by causing cells to become resistant to insulin.

1 thought on “What Is The Fate Of Excess Carbohydrate? Does It Become Body Fat?”