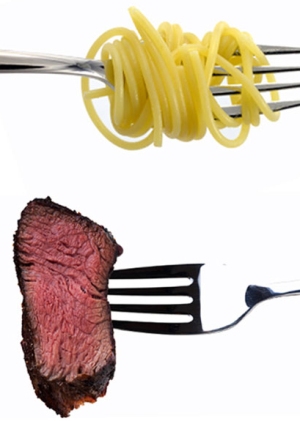 A study was recently published that concluded low-carb diets were better than “low-fat” diets for weight loss and cardiovascular disease markers:

The first thing I looked at was the low-fat group’s fat intake. Their goal was anything less than 30%. They ended up eating 29.8%. This is not low-fat, neither their goal nor their actual intake. A true low fat diet is something less than 15%. I often say…

… that in studies comparing one group to another, you won’t detect a harmful effect of _____ if both groups are exposed to a level of ______ that is risk-producing. … If you want to know if something is harmful – smoking cigarettes, eating saturated fat, watching television – make sure you have a comparison group that isn’t doing it, or isn’t doing very much of it.

I also noticed that the low-carb group was eating fewer calories. Since it’s possible to lose more weight when you’re eating less, I was surprised this piece of data was not made more prominent.

The researchers’ definition of a low fat diet is blatantly false. They assume that a 30% fat diet is low fat, which is not very different from the standard American diet (SAD) at about 35-37% fat. A Whole Food, Plant-Based (WFPB) diet, a truly low fat diet is around 8-12% fat.

In summary, two dietary characteristics illustrate the problem with this latest study, 1) the low fat diet is not low fat and 2) the consumption of truly healthful whole plant-based foods is very low in both diet groups, with no discernible difference between the diets. Together, these two characteristics negate any possibility of observing meaningful results. Both experimental diets are pro-inflammatory, high in fat and very low in foods that actually create health. In no way does it speak to the health benefits demonstrated by the truly low fat WFPB diet.