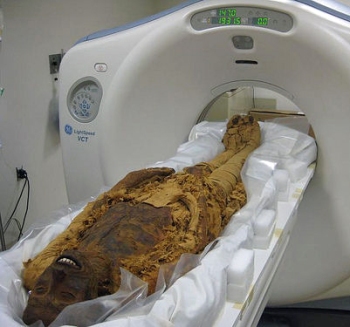 I mentioned in a comment that I had read about atherosclerosis in Egyptian mummies. Here’s one citation:

“Atherosclerosis and vascular calcification are usually regarded as circulatory phenotypes associated with advanced modern lifestyles. However, although rare, such conditions have been identified in human remains from some early societies. Examples occur in an elite Chinese burial (c. 700 BCE), and among Canadian Eskimos (c. 400 CE to c. 1520 CE) whose diet was almost entirely meat. They have also been reported since the early 20th century in the mummified remains of the rulers and elite of ancient Egypt.

Interpretation of the hieroglyphs indicates that the diet consisted mainly of beef, wildfowl, bread, fruit, vegetables, cake, wine, and beer. Many of these food items would obviously have contributed to an intake of saturated fat, and our analyses of the individual meat and wildfowl they consumed would demonstrate that all provided greater than 35% of energy from fat. Goose, which was commonly consumed, contains around 63% energy from fat with 20% being saturated, while the bread that was eaten differed from that consumed today, often being enriched with fat, milk, and eggs. The cakes were typically made with animal fat or oil. Although it is difficult to calculate exactly how much was consumed in terms of portion size, variance in food storage, preparation, and cooking methods, it is still evident from a conservative estimate that the dietary energy was more than 50% from fat with a significant portion of this coming from saturated fat.

It is important to point out that there was a marked difference between the mainly vegetarian diet most Egyptians ate and that of royalty and priests and their family members whose daily intake would have included these high levels of saturated fat. Mummification was practised by the elite groups in society, ensuring that their remains have survived to provide clear indications of atherosclerosis; by contrast, there is a lack of evidence that the condition existed among the less well-preserved remains of the lower classes.

The explanation for these frequent pathological findings almost certainly resides in a diet rich in saturated fat that was confined to the elite, while most of the population remained vegetarian. In consequence, there is unequivocal evidence to show that atherosclerosis is a disease of ancient times, induced by diet, and that the epidemic of atherosclerosis which began in the 20th century is nothing more than history revisiting us.”

It is credible to me that a mummy earned the right to be embalmed because of his or her status in the community. And that status may have afforded the person access to foods that weren’t available to the masses.

So, atherosclerosis, or as my mother called it, hardening of the arteries, isn’t new. It’s likely a result of lifestyle, specifically a diet high in animal foods.