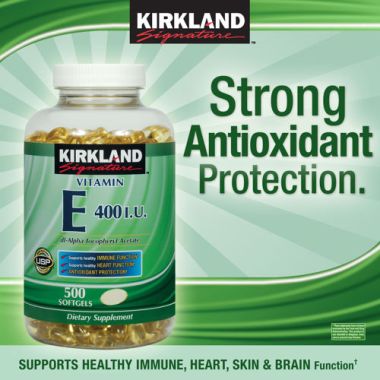 Note that this Vitamin E, the same type and strength used in this study that found taking it increased the risk for prostate cancer, is USP Verified. Less than 1% of dietary supplements are USP Verified. USP does not, however, vouch for a product’s safety or efficacy. The FDA doesn’t either. No regulatory body does.

People are still taking vitamin E supplements, either separately or as part of a multivitamin pill. They should know that this landmark study:

The study was big (35,533 men from 427 study sites in the United States, Canada, and Puerto Rico), and long (7 years: 2004 to 2011). It was designed to test whether taking vitamin E or selenium would prevent prostate cancer. Epidemiological studies suggested they might. Neither were found to prevent prostate cancer. And in the case of vitamin E, just 400 IU’s/day were found, to many people’s surprise, to increase the risk. The increased risk was statistically significant.

“The risk of prostate cancer at 7 years of median follow-up was increased by 17% in men randomized to supplementation with vitamin E alone, a difference that started to appear about 3 years after randomization. … The increased rate of prostate cancer in the vitamin E group was seen as early as 2006 and continued until the present analysis (HRs ranged from 1.12 to 1.17) suggesting that the current results are not an outlier observation due to multiple looks at the data.

Despite the lack of a mechanistic explanation, the findings show that vitamin E supplementation in the general population of healthy men significantly increases the risk of being diagnosed with prostate cancer.

This study only looked at prostate cancer. It couldn’t comment on other cancers. And it also couldn’t say if lesser doses were safe. 400 IU’s raises the risk for prostate cancer, but does 200 IU’s? 50 IUs? The following excerpt is going to hinder future studies that try to answer those questions:

“Furthermore, the fact that the increased risk of prostate cancer in the vitamin E group of participants in SELECT was only apparent after extended follow-up (allowing for additional events) suggests that health effects from these agents may continue even after the intervention is stopped.”

You could draw many assumptions from a study like this, and none of them, given this data, would support taking vitamin E supplements.

But this doesn’t stop people from taking vitamin E, “just to be safe” or “as an insurance policy against when I don’t eat right” or “to top off” their diet.  They say taking vitamins doesn’t do any harm and could help.  How do they know there is no harm?  And where is the evidence that these pills help us live longer? Or in better health?

I just came from Dr. Weil’s site, where he continues to advise taking 400 to 800 IUs vitamin E daily and says (as of 29 October 2012, a year after this study was published), in response to the question, “Are there any risks associated with too much vitamin E?” … “Except for an anticoagulant effect, vitamin E has no known toxicity or side effects.”