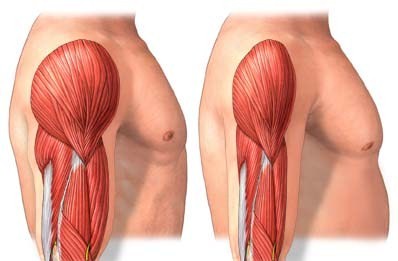 “The impaired function of mitochondria also has a detrimental effect on the way motor neurons ‘talk’ to the muscle to achieve muscle contraction,” Dr. Van Remmen said.

This new study now implicates dietary fat in these processes:

Dietary Fat and Fatty Acid Profile Are Associated with Indices of Skeletal Muscle Mass in Women Aged 18–79 Years, The Journal of Nutrition, March 2014

“Age-related loss of skeletal muscle mass results in a reduction in metabolically active tissue and has been related to the onset of obesity and sarcopenia. Although the causes of muscle loss are poorly understood, dietary fat has been postulated to have a role in determining protein turnover through an influence on both inflammation and insulin resistance.”

Dietary fat is linked to inflammation and insulin resistance, evidence for which I’ve given over the years.

“This study was designed to investigate the cross-sectional relation between dietary fat intake, as dietary percentage of fat energy (PFE) and fatty acid profile, with indices of skeletal muscle mass in the population setting. Body composition [fat-free mass (FFM; in kg)] and the fat-free mass index (FFMI; kg FFM/m2) was measured by using dual-energy X-ray absorptiometry in 2689 women aged 18–79 y from the TwinsUK Study and calculated according to quintile of dietary fat (by food-frequency questionnaire) after multivariate adjustment.”

Quintiles. Did you see that? They divided the women into 5 groups based on fat intake. Why didn’t the saturated fat study use quintiles? Or quartiles? When you want to see difference among groups, the more groups the better. (The Sat Fat study used 3 groups.)

“To our knowledge, this is the first population-based study to demonstrate an association between a comprehensive range of dietary fat intake and FFM [Fat Free Mass or muscle mass]. These findings indicate that a dietary fat profile already associated with cardiovascular disease protection* may also be beneficial for conservation of skeletal muscle mass.”

That profile which protects against heart disease and now sarcopenia is: