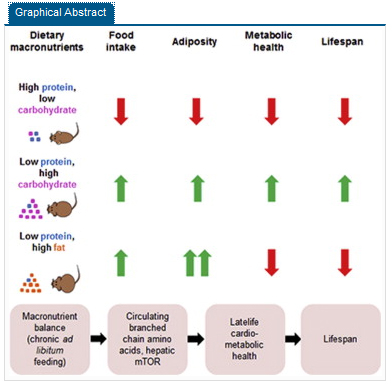 I’m bringing this post from March 5 up to the top because I wanted to add the figure to the right. It was part of the study, used to illustrate the effect of varying macronutrients.

While the low-carb, high-protein diets reduced food intake and body fat, they did so at the expense of lifespan and quality of life. Low-carb eating mice lived shorter lives and had worse health later in life.

The worst diet? High-fat, low-protein. The mice were fatter than the other groups, had poor health, and died early.
________

The fundamental questions of what represents a macronutritionally balanced diet and how this maintains health and longevity remain unanswered. Here, the Geometric Framework, a state-space nutritional modeling method, was used to measure interactive effects of dietary energy, protein, fat, and carbohydrate on food intake, cardiometabolic phenotype, and longevity in mice fed one of 25 diets ad libitum. Food intake was regulated primarily by protein and carbohydrate content. Longevity and health were optimized when protein was replaced with carbohydrate to limit compensatory feeding for protein and suppress protein intake. These consequences are associated with hepatic mammalian target of rapamycin (mTOR) activation and mitochondrial function and, in turn, related to circulating branched-chain amino acids and glucose. Calorie restriction achieved by high-protein diets or dietary dilution had no beneficial effects on lifespan. The results suggest that longevity can be extended in ad libitum-fed animals by manipulating the ratio of macronutrients to inhibit mTOR activation.

“Our results show that healthy aging is not achieved in mice fed high-protein diets and/or diluted diets to reduce calorie intake, but rather by low-protein diets (especially, we might predict, those low in BCAAs*), where additional energy requirements are met by dietary carbohydrates rather than fats.”

So, high-protein diets activate mTOR. mTOR is a protein “that regulates cell growth, cell proliferation, cell motility, cell survival.” A high level of mTOR signaling has been linked to cancer and Alzheimer’s Disease.

“Given the evidence that activation of mTOR is proaging, our results support this as a mechanism to explain the life-extending effects of a low-protein, high-carbohydrate diet.”

By the way, insulin also activates mTOR. People in the early stages of diabetes often have high levels of insulin – their pancreas is attempting to compensate for increasing insulin resistance brought about, in part, by eating too much fat, especially saturated fat. So…

Having worked in the field of diabetes for years I know that “people with diabetes are at significantly higher risk for many forms of cancer.”