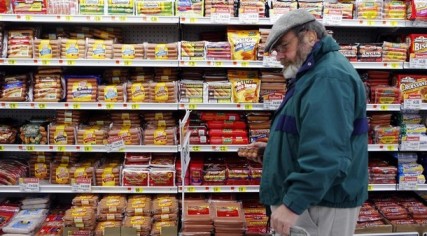 I was at Walmart yesterday looking for an inexpensive cutting board. Boy, do I go through cutting boards, now that I use wood. I used to use plastic or acrylic cutting boards because they never warped, were dishwasher-safe, and didn’t dull knives. But I became antsy after reading about polymers, how they accumulate in the body, and how they’re not as inert as I once believed. They often mimic hormones, acting as endocrine disruptors, and are thought to contribute to a number of metabolic disorders such as obesity and diabetes. They also interfere with sex hormones and have been linked to infertility and birth defects. The immune system, the brain and nervous system … there isn’t a bodily function they don’t in some way impact.

Back to Walmart. I found something in bamboo. We shall see. While I was there I noticed how extensive their food section had become. It isn’t just Walmart, it’s other discount stores too like Target, BJ’s, and Kmart. They’ve given up space that used to hold housewares (but, really, who cooks anymore) and automotive and garden supplies, to shelves of colorful plastic food containers and wall-long refrigerated units with prepared meals. There must be enormous profit in packaged and prepared foods.

That’s not good, because:

“The synthetic chemicals used in the packaging, storage, and processing of foodstuffs might be harmful to human health over the long term, warn environmental scientists. This is because most of these substances are not inert and can leach into the foods we eat, they say. Despite the fact that some of these chemicals are regulated, people who eat packaged or processed foods are likely to be chronically exposed to low levels of these substances throughout their lives. And far too little is known about their long term impact.”

Food Packaging And Migration Of Food Contact Materials: Will Epidemiologists Rise To The Neotoxic Challenge?, Journal of Epidemiology and Community Health, 19 February 2014

“Food contact materials (FCMs) have long posed a silent challenge to researchers concerned with human health, nutrition and the environment. FCMs are articles used in packaging, food storage, processing or preparation equipment that come directly into contact with human foods. Most often FCMs are made of plastic or have a synthetic material in direct contact with the foodstuff — for example, as can coating, laminate in beverage cartons or the closures of glass jars. Importantly, most FCMs are not inert.”

Some of the cutting boards I was looking at were manufactured with Microban, a proprietary chemical blend known to include triclosan, an antibacterial and known endocrine disruptor. Microban is “added to a product during manufacturing and becomes part of its molecular structure.” You can’t wipe this stuff off.

I see two problems with these chemicals, besides the growing list of diseases they’re linked to. One – a single dose here and there probably isn’t harmful, or at least we could measure its impact. But the effect of chronic, low-level exposure of thousands of substances – that accumulate – isn’t known. Two – these chemicals are everywhere.