I’m reposting this from April 2011 because I know so many people, women especially, who insist on taking calcium supplements.
________ 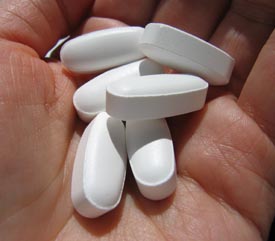 The leading cause of death for women in America is heart disease.1 It now looks like some of those heart attacks (and strokes) may have been provoked by the calcium supplements women were taking to protect their bones. (Heart disease is the leading cause of death in men too, but I don’t think men are pressured as much as women to take calcium. Men may also be refraining because of the spectacular association between calcium and prostate cancer.)

A revisit of data in the huge Women’s Health Initiative (WHI) study found that women who took calcium supplements increased their risk for heart attack and stroke:

The original WHI analysis showed no such risk. But that was because thousands of women who were already taking calcium before the study weren’t told to stop. If those calcium-takers ended up in the placebo group (which was supposed to receive no calcium), you might expect them to show similar heart attack risk as intervention groups (which did receive calcium). That’s exactly what they found.

This new analysis looked at women who weren’t taking calcium before the study. If those women were randomized to a group that received calcium, it did indeed increase their risk for heart attack and stroke.

The Amount Of Calcium Didn’t Matter

“It is actually taking a supplement that matters, not how much of it you take, that causes this increase in heart risk.”

And from a HeartWire interview:

“That makes sense, [Reid] says, since even small levels of supplemental calcium create “abrupt” increases in blood calcium levels within hours. This speaks to one criticism levied at the group’s earlier work — namely, that the cardiovascular events seemed to be occurring too swiftly to be related to calcified plaques.
…
MI spikes likely reflect a more acute response to blood calcium levels, including changes in platelet function, blood coaguability, or endothelial cell activity.”

I would like to add to those mechanisms something readers of this blog already know – calcium lowers vitamin D levels, and vitamin D is thought to be cardio-protective:

“If serum levels of calcium are high, production of 1, 25 D is suppressed by reduced parathyroid hormone production.”

The present analysis found no benefit in taking vitamin D.

Dr. Reid: “Our own recommendation is to critically review the use of calcium supplements, since the data in this paper suggests that they do more harm than good.”